Were you looking for the base Crow's Nest?

Crow's Nest is the third campaign level of Halo 3.

The level begins with John-117, the Arbiter Thel 'Vadam, and Sergeant Johnson landing in an underground UNSC base. When they disembark, several Marines are amazed to see a Spartan II. As they walk through hallways littered with wounded or crippled UNSC soldiers, Lieutenant Commander Keyes informs John and Johnson that Truth has almost destroyed the UNSC Home Fleet, and only a few ships are left. They soon reach the command center and speak with Lord Hood, discussing a plan for an all out attack on Truth's army.

Unfortunately, the Covenant then jam the Human communications network along with the rest of the base, shutting off the power. The Prophet of Truth appears on the main view screen, telling the Humans that their world will burn. The base is then attacked by a large contingent of Covenant Loyalists. John-117 helps rescue and evacuate as many marines as possible from the base. Unable to fight off the invaders, Keyes orders a time bomb placed in the command center. Covenant troops, however, overrun the operations center and manage to defuse the bomb. John-117 retakes the ops center by force and rearms the main charge. All remaining troops, including John-117, escape into the base's hangar, where they enter an elevator to attempt to escape the explosion.

Kilo 023 touches down. Medics load an injured marine on a stretcher and move. John-117, Thel 'Vadam and Johnson get off. Marines sitting by the landing pad see John get out of the Pelican.

Lieutenant Commander Miranda Keyes comes out onto the Landing Pad to meet Johnson, 'Vadam and John-117.

They salute, as she salutes back and smiles.

Down the hallways of the base, wounded Marines lay against the walls. Two Marines chatting to each other notice Commander Keyes and John-117. They make way and salute.

As 'Vadam walks by, the Marines lower their hands and stare in astonishment.

The Prophet of Truth suddenly appears on all the screens.

Miranda walks up the stairs and draws a Pistol. She pulls the slide back.

She lets go and moves on.

(Co-op Change) Sergeant Johnson: "Chief, move out. You too, Arbiter. The Commander will brief you as you go."

(With IWHBYD Skull) Marine: "This base was built for some 20th century war, and it's pretty damn cool!"

John finds many weapons to stock up on.

The Marine opens the door. John walks on through to find Marines in a large cave setting up defenses for the Ops Center.

John-117 proceeds on, meeting up with two Marines.

John grabs some Fragmentation Grenades from a weapons case near the door, then opens it, and lets the Marines lead the way.

The Marines find the vehicle access. A Warthog is in battle with many Covenant soldiers. Grunts lob Plasma Grenades and destroy it. John and accompanying Marines engage and win, pushing onward. They reach an open door heavily guarded and defeat the Covenant there and continue through into the narrow corridors.

If John-117 continues to the end of the vehicle access, there is a Marine knocking on the door asking for the doorman to let him in. This is a Red vs Blue Easter Egg; the voices and the lines depend on the difficulty level. (See the Password-Lacking Marine)

John and Marines on the offense secure the deck. Multiple Phantoms drop troops into the hangar, attempting to take it. From a distance, Hornets and Banshees are seen to be engaged in an aerial fight near a Cruiser which keeps supplying Covenant reinforcements to the base. John and Marines take turrets and defend the hangar. The UNSC forces prevail. The Phantoms retreat and their troops fall.

The Pelican hanging on a crane in one of the docks slides out and is released. The Dropship lands to evac the Marines in the hangar, while John-117 restocks on weapons and ammo.

John heads back to the Ops Center. Marines pass by for evac. Back in the vehicle access, two Marines, staying behind until the next evac, hear sounds of Drones' wings beating and metal banging in the ventilation pipes.

John heads back into the corridors, with the two Marines following.

The COM systems remain silent. The banging and fluttering noises continue on.

John-117 meets with the Marines in the cave, defending the Ops Center.

Behind him you suddenly see parts of a ventilation pipe falling down and some drones comes out from the pipes. One of them suddenly appears above the Marine and picks him up before killing him. (The Drone can be killed before it picks up the Marine. If it does, he can still be saved by simply shooting the Drone, which will drop the Marine).

A swarm of Drones starts pouring out the ventilation shafts, and engulfs the room.

The Marines open fire on the swarm. John finds a turret and unloads on them. The swarm eventually falls. Marines in the Ops Center open the doors, letting John in.

Butchers in the barracks.

John-117 meets with Johnson smoking a cigar and other defending Marines setting up an explosive device, but Thel 'Vadam isn't with them. (Single Player Only)

Johnson drops his cigar and stamps on it.

Johnson leads John to the back of the room, guarded by four Marines, and a Weapons Locker sits by it.

John-117 takes weapons and ammo from the locker.

If you stay near the bomb:

John heads through the corridor to the Motor Pool. While down there, he spots a Brute Pack, lead by a Brute Chieftain with a Gravity Hammer.

After wiping the Brute Pack out, John-117 continues on through a corridor, but it's caved in. Finding a hole in the floor, he jumps down into a shaft, and at the bottom are several pipe entrances, which Drones fly in and out of.

Master Chief jumps down through vertical shafts into a canal, where he finds Thel 'Vadam, fighting off another swarm of Drones.

After 'Vadam takes care of the Drones, he and John regroup.

John-117 and 'Vadam head through the door, seeing a captive Marine thrown hard into a pillar, where multiple Marine corpses lie. The Marine dies and falls limply to the ground, and John and 'Vadam rush in. One Marine being held by a Brute begs for mercy as it decides to kill him, too.

If the camera is detached in theater mode, you can see that the barracks are filled with Brutes torturing Marines. For example, there is a Brute Captain holding a marine by the ankle.

If John fails to save him, the Brute breaks his spine and throws him on the ground behind him, laughing.

If John saves the Marine:

John and 'Vadam kill the Brutes and release the prisoners (optional). While the Marine rushes for a weapon, John and 'Vadam save every prisoner they can.

Taking out the Brutes, the surviving Marines grab weapons from more piles of corpses, taking a second to grieve for their comrades while John and 'Vadam resupply and reload. They continue their rescue throughout the barracks, defeating the Brutes and rescuing (a maximum of) seven Marines, including a Sergeant.

(Co-op Change) Gunnery Sergeant (Reynolds or Stacker): "You did the best you could, sir. Let's get the survivors up to the hangar. There's an elevator just outside the barracks."

John leads the survivors outside to the lift. He activates it and they wait for it to come down. While they wait, matters get worse.

John, 'Vadam and the Marines board the elevator back up to the flight deck. While heading up, Kilo 23 gets into trouble.

Kilo 23 takes off, getting out of the Brutes' reach. Noticing John and 'Vadam, the Brutes attack them. After successfully retaking the flight deck, a door at the road below opens, and Johnson approaches them, holding an SMG. Seeing Johnson and his surviving squad at the doorway under attack from Drones, John and 'Vadam assist.

The few Drones are quickly eliminated. Kilo 23 returns for final evac. The barracks survivors and Johnson's squad board the Pelican dropship.

Johnson and Thel 'Vadam board the Pelican. John-117 goes along the road Johnson previously came from, passing by destroyed Warthogs and dead Marines. (In Co-op, 'Vadam will accompany John)

Last One Out, Get the Lights

John reaches a door at the end of the road.

John walks on through to another roadway, with Covenant Plasma Cannons set up. Using the Plasma Cannons and/or using all available cover, he gets back to the Motor Pool next door to the Ops Center.

If John is taking a while:

Truth disconnects from the screen.

As the two Grunts and Brute Captains get busy, John takes them by surprise and defeats them, taking back the Ops Center and the bomb.

If John waits around a bit.

If John looks around the ops center.

John-117 reactivates the bomb and the alarm sounds.

John heads back into the cave, where Grunts run wildly, then through the corridors.

If John takes his time:

He continues back out to the vehicle access, where Drones, some Jackals and Grunts flee, and back down the corridors to the hangar.

John gets to the hangar, where Phantoms flee, and Grunts run around in panic and some trying to catch the fleeing Phantom, holds up and looks miserable.

If John takes his time.

If it takes John more time to get to the elevator.

John-117 makes it to the service elevator, and activates it. The door doesn't fully shut. Something explodes and flames flicker through the gap.

The elevator descends. John-117 hears a massive boom. He looks up and sees the flames roar through the open door. The violent shaking disconnects the elevator and sends it plummeting down. It crashes and John blacks out. 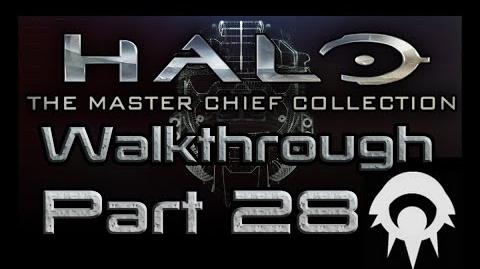