Data Hive is the ninth and penultimate campaign level of Halo 3: ODST. It is set in the immense data facility below the city of New Mombasa, where the Covenant are trying to gain access to the Superintendent's data core. It is the first linear level in the game after the hub.

The Rookie, having found Dare's distress signal after exploring the city, descends down an underground elevator shaft into the Superintendent's Data Center. He arrives at sub-level 7 of the complex and must fight his way down to sub-level 9, where Dare is hiding. On the way down The Rookie has to defeat a range of Covenant, including Brutes and Drones, during this time the Rookie runs into a NMPD Officer searching for his men. He follows the Rookie until he is killed by either the Drones or the Rookie (Depending on the amount of audio logs found). Once the Rookie and Dare are reunited, Dare informs the Rookie of the true nature of their mission. The two then fight through a Drone hive to the Superintendent's core to secure its data as well as "the asset," revealed to be a rogue Huragok named Vergil that has taken refuge there. Vergil has assimilated the Superintendent's data with its own knowledge, making it an extremely valuable defector to the UNSC and a major liability for the Covenant. Buck fortuitously arrives just as Covenant reinforcements attempt to secure the complex, and with his help Dare and the Rookie escort Vergil safely to the surface through heavy resistance.

View of a dimly-lit room in the Superintendent's Data Center is shown, with an elevator car on the bottom of its shaft. The Rookie descends from the elevator shaft, and drops to the top of the elevator car.

As Dare is cut off by static interference, The Rookie clicks his comlink with his fingers, and glances at the wall to his right, where the text "SUBLEVEL 07" is written, accompanied by the Superintendent's avatar.

After going down the first service corridor for some time, the Rookie can overhear a brief conversation between two Grunts before they spot him.

The Rookie traverses through the facility, encountering small amounts of Covenant resistance. He then starts to pick up a conversation between the Superintendent and a lone survivor.

As the Rookie pushes through a few Covenant lances, he rescues the survivor, who turns out to be an NMPD Officer.

The Data-Stack suddenly activates when the Rookie approaches it.

Drones suddenly flies out of the shaft.

After the Drones are killed.

The two descend down into the stack. They drop into a circular room. The Rookie heads through a door.

The Rookie can see Drones eating some bodies.

The two continue through many locked data stacks filled with Covenant.

The two defeats the Covenant forces. They eventually meet a dead end with a Data Stack.

If the Rookie doesn't have 29 of the Audio Logs, the officer will stay up as Drones appear.

The stack closes as the officer is killed by the Drones.

Alternatively, if the Rookie does have 29 Audio Logs, the officer jumps down with you.

After heading through the door, the two emerge into an icy hallway, with Covenant patrols and a War Chieftain ahead. The two kills all of them.

The officer walks up to a door on the left side of the frozen room.

If the Rookie follows him:

In front of him, a frozen body is crouched against the wall.

When the Rookie approaches the body:

The Officer fires on the player. The Rookie kills the traitor.

If the Rookie approaches the telephone next to Sadie's father, he can download the last part of Sadie's Story.

The Rookie leaves the room and continues to a cross road. To the left is a dead end with a Flamethrower in the corner. Up ahead is a path. The hall starts to go from frozen to normal temperature.

The door leads to a narrower hallway, with a locked door at the end. The Rookie knocks on the door.

The Rookie approaches the door cautiously, watching the hallway, SMG at the ready. He lowers it and knocks on the door two times. He readies his SMG again. The door opens and Dare pulls the lever on her pistol. Seeing the Rookie there, she looks surprised.

The two hear a Drone's screeching coming from the hallway or (if you've escorted the NMPD Officer to the frozen section) an unknown, possibly Covennant gurgle like sound is heard.

The Rookie enters the room. Dare hits a button and the door closes and locks. Cut to one of the Superintendent's cameras. It looks over the room that Dare and the Rookie are in.

The view cuts from the Superintendent to a view of the window, in which Dare and the Rookie can be seen walking towards the window. He displays the "Happy" expression upon seeing them.

A Drone crawls on the wall above the window, then flies away. The view goes inside the room. The Rookie walks up to the window.

The view goes to the Superintendent's camera, showing the Rookie and Dare.

View returns to the room. Dare walks up to the exit.

The Rookie nods his head.

The two head to the exit at the end of the room. Back at the hall, the two encounter Covenant reinforcements.

The two destroy the reinforcements.

The two make their way to the hole.

The Rookie jumps through the hole and lands hard, injuring himself slightly. Dare jumps after him. They emerge into a huge room. The two turn into another room with a Covenant patrol. The Rookie and Dare kill all of them and turn right, into a huge cavern like room with Covenant crates all around.

The two make their way across the bridge, heading left to an open door.

The door opens to a small room with another door,locked,and an elevator.

The Rookie gets on the elevator and activates it. It starts to go up.

The Superintendent doesn't finish the sentence, but Dare speaks up.

The elevator opens to a narrow hallway. The two walk through it, reaching a opening in it in the middle. They reach another cavernous room.

However, it isn't long before the Drones find them and swarm them.

The Drones start firing. The Rookie and Dare defeat them, but as they progress, more Drones come.

The door at the end leads to a narrow hallway. At the end, a short drop leads to an open door. The door opens to a huge room, with the data center in the middle. A Phantom arrives.

The two runs to the door, where a Brute Chieftain and his bodyguards are trying to break in.

The Rookie and Dare defeat them and secure the door.

The view shifts to inside the data center. The entrance opens to see the Rookie and Dare. They walk slowly in, weapons at the ready. At the end of the room is what appears to be the data core. As the two look at it, a spark lights off in it and there is a strange noise. The door closes on them. Dare activates the flashlight on her pistol. She points it at the core.

The view goes to the Superintendent. The camera is above the Rookie and Dare.

The screen then goes to static, then shuts off entirely. Back with the pair, they walk to the core. Suddenly, Dare's pistol shows a small tentacle through a hole. If the player has 30 audio logs, Dare raises her pistol, using the attached flashlight on it to get a better look, but the Rookie interrupts her and shakes his head, thinking the creature was scared of the gun, He then whistles to bring the creature out. However, if the player doesn't have 30 audio logs, the Rookie will raise his SMG but Dare objects.

Either way, a long and thin head sticks out. The view goes to the pair, where it reveals it's a Huragok.

Dare puts her pistol down.

The Huragok comes close to them.

Dare reaches out a hand and puts it close to the Huragok.

The Engineer points his head toward a shard of metal on his back. Dare reaches up and takes it off. Dare reaches out and the Huragok appears to sniff her hand.

A beeping noise from the core catches their attention. The Huragok floats toward it and uses a tentacle to push a button, revealing a small monitor. The Superintendent zooms in on some Jetpack Brutes landing on the rooftop. The view goes back to the room. Dare approaches the monitor.

The Superintendent zooms out of the Brutes and zooms in on a black figure. It's an ODST.

The Superintendent zooms in on him from another camera.

The view goes back into the data center, where Dare picks up her pistol.

Dare pulls the lever on the pistol.

Dare then nods to the Rookie, whose next to the door. The Rookie opens the door. They both raise their weapons.

The three head back to the exit. Both troopers have energy shields now, provided by the Engineer.

Outside, two Jetpack Brutes jump out while a Phantom drops off more. The Rookie and Dare defeat them. The Rookie proceeds to the Covenant reinforcements.

Buck and the three regroup. A door opens to the right.

Behind the door is a short hallway leading to a hole. The Rookie and the others drop inside a dark room filled with sleeping Drones. They can either fire on them or sneak past. Buck is now protected by the Engineer's shields as well.

An opening in the left part of the room leads to the hallways that looks like the ones at the beginning. The four head to a right.

The Engineer heads to the door and starts unlocking it.

After this conversation, the Engineer successfully opens the door. Up ahead, more sleeping Drones are spotted. The four can kill them or simply ignore them. The four head to a door at the end of the hall. It leads to a small room with an elevator. At this point, the Drones awake and start attacking. The four defeats them.

The level ends as the four gather on the elevator. 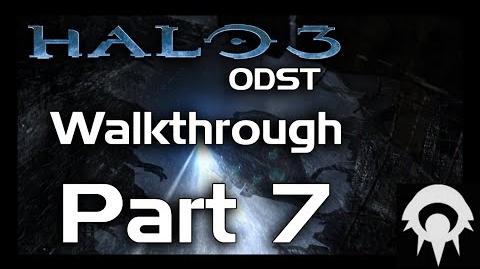 The Rookie wielding a flamethrower.

Concept art of the level.