Onboard remains of UNSC Forward Unto Dawn, orbiting Requiem

Dawn is the first campaign level of Halo 4 and takes place aboard the wreckage of the UNSC Forward Unto Dawn, as it is heading directly for Requiem. This mission re-introduces John-117 and Cortana, and is the first appearance of Jul 'Mdama's Covenant faction.

The level starts with John being awakened by Cortana due to some unknown activity aboard the ship. John is sent to investigate. As he looks around he discovers Covenant searching the ship and after dispatching them he finds out that there is an entire Covenant fleet assaulting and that the Dawn is being pulled inside the Forerunner planet Requiem. Cortana directs Chief to activate the Hyperion missiles to get rid of the Covenant Cruiser, John does so but has to fire them manually. The Cruiser gets destroyed and John runs for the escape pods as the Dawn is still being pulled inside Requiem. But John doesn't make it and is sucked into Requiem along with the rest of the UNSC Foward Unto Dawn.

Several ship parts are floating in space in a tight group.

As the largest part comes into closer view, the name "Forward Unto Dawn" becomes visible. Cut to the inside of the ship. An automated message is playing.

Scene shifts through in the ship as several ship parts float in the ship. Scene shifts to a core room, which starts shaking. Suddenly, a visible scan line appears that moves through the ship, scrambling some of the still active electronic parts. Scene continues to move, entering the cryoroom. A bright blue light is visible at the far end of the room. The light source is shown to be a sphere of blue light on an AI pedestal. As the ship shakes again, the sphere disappears as blue light shines on the pedestal, replaced by the figure of Cortana sitting down.

Cortana gasps and looks around. She stands up. A hologram appears in front of her, with the words "UNSC" visible on the top left. She starts moving things around. Cortana begins searching desperately, shaking her head and looking visibly scared. She reaches a status report, with red circles outlining hull breaches. 5 red circles are highlighted on the ship. She then brings up the cryostatis control page. One of the sections shows John-117's Mjolnir armor. Cortana presses the command to reactivate after some consideration. The status update with the red words "ACTIVE" comes up. She closes her eyes and turns to John's cryotube.

The frost covering its glass surface thaws, and John-117 can be seen. Cut to black.

John's HUD appears on his visor.

The drifting crates and debris in the room drop on the floor.

John looks up and pulls the cryo-tube's manual release lever. The cryo-tube opens and John steps out and walks over to the holotank that Cortana is occupying.

John pulls Cortana out of the holo-tank and inserts it into his neural interface. John raises his MA5D Assault Rifle in preparation for combat.

John enters a room with a holo-table displaying a hologram of Forward Unto Dawn. If the player activates the terminal in front of it:

John-117 maneuvers down many hallways.

John enters a circular room with a center console displaying a holographic replication of the Dawn's predicted drift course, showing the ship being pulled toward a red icon. Suddenly, a large, orange wave of energy scans the ship, producing a loud noise and disrupting all electronics.

John leaves the circular room and leads into another rectangular room with an elevator.

John approaches the elevator doors and pries them open with his bare hands.

John climbs a few feet. Debris falls from the top of the shaft and he is forced to act fast.

John-117 jumps to the left, managing to avoid the falling debris.

John manages to climb to the top of the shaft, avoiding falling debris. After stepping into the opening to the next level at the top of the shaft, a Sangheili wielding an Energy Sword emerges from the smoke. John blocks the Sangheili's sword strike, punches it in the side of the head, then grabs it's jaws and throws it down the depressurized elevator shaft. The shaft's door locks behind him.

John continues and enters the Observation Deck. The windows are covered by the blast shields. A Sangheili is fiddling with the console, while multiple Unggoy are patrolling on the lower deck. John takes them out.

John heads for the controls and activates the override, the blast shields begin to open.

The blast shields open all the way. A Covenant fleet consisting of several CRS-class light cruisers are seen holding position in front of the Dawn. A mysterious planet can be seen in the background. A formation of Banshees fly close to the observation deck windows and flies away.

The Phantoms fly to both sides of the Observation Deck.

The landing craft breach the glass, the Deck begins to lose pressure. Several Covenant troops board the ship.

John eliminates the forces in the area.

John heads for the elevators. (If player checked the weapons systems)

(If player did not check weapons systems)

John enters an elevator and rides it down a few floors until it opens to another hallway. He fights through more Covenant forces eventually reaching a stairway.

John enters a large room and meets more Covenant forces, defeating them. John eventually makes his way to an airlock.

Some distortion appears on John's HUD.

The airlock doors opens revealing the Dawn has moved closer to the mysterious planet.

John makes his way over to the launch station encountering Sangheili, Kig-Yar, and Unggoy Rangers.

John eventually reaches the launch station and activates the controls.

The silo door on the far side opens, a missile rises, preparing to launch, one of the blast doors is jammed.

Phantoms drop more troops into the area, forcing John to take them out before he can launch the missile.

John pushes, and then kicks the blast door to its proper position.

The missile launches, destroying the cruiser, which was charging its energy projector. The cruiser shatters into pieces and the debris drifts over the Dawn. Suddenly, an orange light from the planet scans John.

A circular opening on the planet begins to open, emitting a bright blue light.

Everything floating outside is pulled toward the planet.

John heads for the airlock and makes it inside.

John head back into another hallway.

John heads down a hallway, the floor collapses slightly before he can reach the end.

John heads into a room with a few Unggoy, the floor collapses, forcing John to go around the perimeter of the room.

John enters a large room with more panicking Unggoy, the ship continues to collapse around John.

John continues toward the vehicle bay, a wounded Sangheili limps down the hallway.

As John makes it to the vehicle bay, one of the doors is ripped out. The room is de-pressurizing.

John tries to hold onto the door but can't. He manages to grab hold of a railing.

The railing eventually gets pulled out, John gets pulled out of the ship and into the debris field. Covenant ships are also being pulled into planet.

John continues to drift through the debris. One of Dawn's debris hits a cruiser, causing an explosion on the Covenant warship. John drifts through the hole in the cruiser the explosion left. Suddenly, a piece of debris flies at John. Cut to black as the debris hit him. 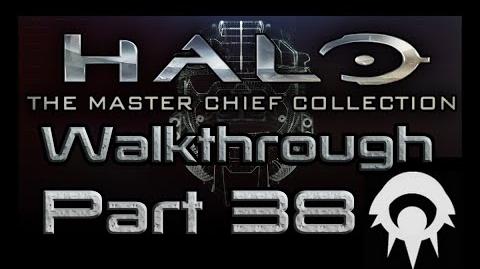