Death from the Grave

It is represented by a platinum eight-pointed star with a face without a mouth in the center of the star. This would usually occur from a grenade (most commonly Plasma Grenades) or Needler rounds detonating after the recipients death, or a slow moving projectile such as a rocket making contact with a foe once the being who has shot the rocket is defeated. As this medal is awarded, a message appears on the screen, saying "You killed (player) from the grave". 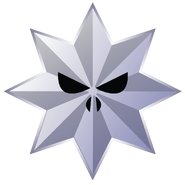 The "Death from the Grave" medal from Halo 3.

The remodeled version in Halo: Reach.

The "Kill from the Grave" medal from Halo 4.
Add a photo to this gallery

Retrieved from "https://halo.fandom.com/wiki/Death_from_the_Grave_medal?oldid=1801491"
Community content is available under CC-BY-SA unless otherwise noted.