The surface of Installation 05

Delta Halo is the eighth campaign level of Halo 2. After dropping onto Halo in an HEV, John-117 fought his way through Covenant forces to reach the temple where the Prophet of Regret resides. This is the only Halo 2 level where you will be aided by ODSTs and is also the first level you fight Honor Guard Elites.

A Slipspace rupture appears in space. Regret's Carrier comes out, followed by some debris from New Mombasa and the UNSC In Amber Clad.

Cut to interior of In Amber Clad:

Pan over to a room lined with HEVs:

Johnson is inside a HEV pod, smoking a smashed cigar.

The In Amber Clad heads toward Delta Halo.

In the pod, John-117 looks at Halo on his viewscreen. The words "CLASSIFIED" and a notice from the Office of Naval Intelligence appear over the image.

Johnson knocks twice on the hatch of John's pod as he is walking by, John-117 pounds back in acknowledgment.

The pods drop, and the platoon hell-jumps onto Halo.

On Halo, an Unggoy and a Kig-Yar notice the pods flaming and streaking down towards them. The Kig-Yar Minor snarls in alarm. He flicks his wrist, and his energy shield snaps on. The Unggoy boards on the Shade and shoots at the pods, and soon another Shade starts firing. The pods land, John-117 breaks the cover open on his pod, scanning the area with an SMG.

John-117 takes up a Rocket Launcher out of his pod and hefts it.

They come under fire of the Shades.

When John takes out all Covenant in the area:

A Phantom drops off troops. John eliminates them

A second Phantom drops off troops. John-117 eliminates them as well.

A third Phantom drops off a squad of three Spec Ops Sangheili and a Stealth Sangheili on Legendary.

If John stays and waits for the Warthog

A Pelican arrives, dropping off a Warthog and two Marines, if the ODSTs have been killed.

The Pelican drops the Warthog.

Later, John-117 comes across a bridge held by the Covenant.

After extending the bridge:

If John-117 stares at Regret's hologram, then walks up to the ODST

If John keeps staring at the hologram

If you choose to go on foot, Warthog, or Ghost.

John-117 passes through a multitude of Forerunner ruins.

You Break It, You Buy It

During the attack on the structure:

After the Pelican drops some weapons, more Covenant arrive.

Once the outside is clear.

As you progress into the building, you come across a hologram of the Prophet of Regret

Off The Rock, Through The Bush, Nothing But Jackal

Later, you find more Covenant near a waterfall flowing into a creek

After that, you reach a massive temple

As you enter the temple, you find two Honor Guards standing next to another Regret hologram

Originally, Bungie had planned for the level to begin while John-117 was still in the Orbital Drop Pod. Two Pelicans would fly by a window in the pod, which the player would have to save them from the turrets seen in the opening cut scene. However, this feature was cut due to bugs and a time shortage.[1]

Solemn Penance comes out of Slipspace.

John-117 alongside an ODST fireteam.

An ODST exiting his HEV pod before the mission.

In Amber Clad arrives at Installation 05.

A pair of Wraiths across a bridge.

A section of the level in pre-released Halo 2: Anniversary.

Another section of the remastered level.

John-117 facing off against a Sangheili Honour Guardsman.

The player attacking two Sangheili with a BR55 Service Rifle.

Watching the hologram of the Prophet of Regret while holding an SMG.

The player being watched by multiple Unggoy, a Sangheili and a Shade turret.

John-117 under attack by a Energy Sword-wielding Sangheili Honour Guard. 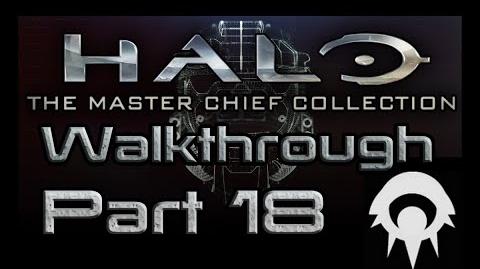 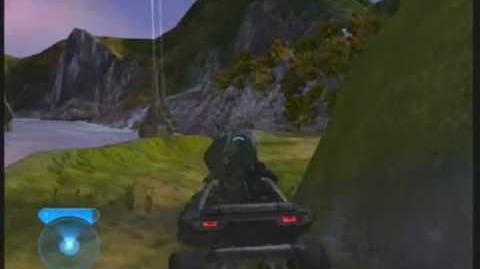