Derelict is a multiplayer map in Halo: Combat Evolved. It is set aboard a Forerunner space station apparently in orbit around Threshold, as the planet is visible through the windows, as well as the moon Basis. It is cataloged by the UNSC as Deep-Space Anomaly #0198. It is a very small level that is best suited for 10 or fewer players, as more can become extremely chaotic unless that is the desired effect. Derelict was remade as Desolation in Halo 2 as part of the Blastacular Map Pack (it is only available on the Xbox version of the game, as it was released after both the Multiplayer Map Pack disk and the PC port).

Derelict is a small, symmetrical map where battle is fast and furious. The four pillars near the center of the map support a cross-shaped system of catwalks. These catwalks are accessible only by teleporter. The catwalks make excellent sniping or grenade-throwing positions, though standing still at any place on this map means inviting a swift death. 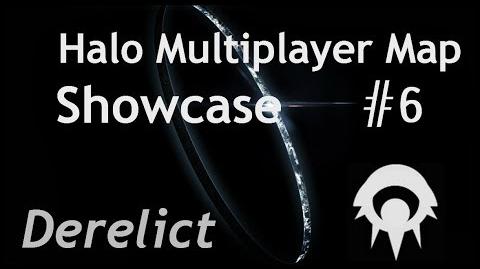