Desolation, also known as War Games Map_Set/: 320-5[1] is a Halo 2 multiplayer map. The map was designed from the ground up by video game company Certain Affinity, as part of the Blastacular Map Pack. Desolation is a remake of the multiplayer map Derelict, from Halo: Combat Evolved. It is only available on the Xbox version of Halo 2.

Desolation has an entirely new setting. Rather than a facility of some kind in deep space, as Derelict was, Desolation is located on Delta Halo. Analysts from the UNSC Coral Sea believe it to be a facility used to study the sapient species retrieved by Forerunner Lifeworkers during the Conservation measure.[1]

It features a similar weapon set to its precursor, but adjusted to account for Halo 2's different arsenal. For example, the Assault rifle spawn is replaced by a Battle rifle. There is also an Energy Sword to accompany the Shotgun. However, the tunnels on the upper level have not been replaced by ramps that lead down to the ground level, as Bungie suggested they would be, in a Weekly Update.

A fight on Desolation.

A shot of Desolation showing the trees. 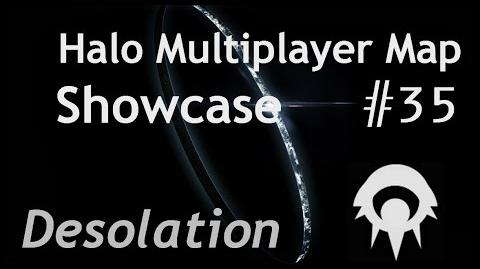