Diamondback's layout is almost identical to Avalanche's. It takes place in a U-shaped canyon which is cut in half by a Lethbridge Industrial building. The bases consist of three levels. The first level is simply the ground-height entrance. These entrances lead up a ramp and onto the second floor, where the flag and Teleporter are situated. From the second floor, another ramp leads to the third level, which is essentially a walkway going across the front of the base. A Man Cannon is situated here, which launches the player about halfway to the bottom of the 'U'. The landing zone of this man cannon is nearby another man cannon which launches players in the opposite direction, into the base.[1]

The teleporters in each base lead to platforms at the corners of the U-shaped canyon, which is where the two Rocket Launchers can be found. These platform also play host to a man cannon each, which launches players into the bottom of the U.[1]

In between the two parallel sections of the valley, there is a tunnel. It is accessible from sloped ramps of dirt that lead up to its entrance on either side. As well as a shotgun, this tunnel contains a man cannon which launches players down into the Spartan Laser spawn location at the bottom of the U. Another man cannon nearby the Spartan Laser launches players back up to the tunnel.[1] 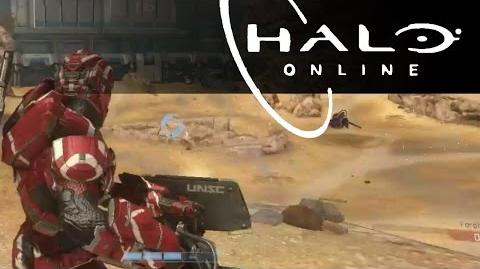