The Double Kill medal is obtained by killing two opponents within four seconds of each other. It is available in most multiplayer gametypes and Campaign scoring modes and has a Bungie difficulty rating of 5 out of 10.

It is represented by a brass and golden circle with two blue stars in the center of the circle. When someone attains and achieves this medal, the announcer will shout "Double Kill!" to the player that received this medal. In Halo: Combat Evolved, because there are no medals, if a player kills two opponents within four seconds of each other, they will still hear the announcer, but instead of the medal they will see the words "Double Kill!" in the upper right corner of the screen. It is the most frequently earned multi-kill medal. 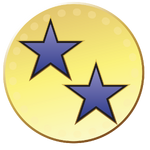 The Double Kill medal as it appeared in Halo 2, Halo 3 and Halo 3: ODST.

The medal as it appeared in Halo Reach Beta.

The medal as it appeared in Halo: Reach.

The double kill medal as it appeared in Halo 4.
Add a photo to this gallery

Retrieved from "https://halo.fandom.com/wiki/Double_Kill_medal?oldid=1801470"
Community content is available under CC-BY-SA unless otherwise noted.