The EMP Rifle is a support weapon seen in concept art for Halo Wars. The weapon is an Insurrectionist infantry weapon that generates an Electromagnetic Pulse. To use the rifle, one must wear a charging backpack that features a large, metal dish. The dish collects and focuses static charge and transmits this to the weapon. The charge is converted into an EMP beam, which is then shot out from the rifle and used to disable electrical systems.

Variants of both the focusing prongs on the front of the rifle and the charging dish seem to be used by the X23 NNEMP Cannon, another EMP rifle utilized by the UNSC.

EMP Rifle is part of the Deleted Material cut from the Halo game.

When developing the Halo games, Bungie and other developers such as Ensemble or Wingnut Interactive had, or have, to cut some content from the final games. As such, many aspects of the story, such as vehicles, gameplay, design, and even story elements, didn't make it into the final versions. Many of the elements have been confirmed by such material as videos and commentary on the Limited Edition Special DVD, interviews with developers, and released concept art.

In Halo: Reach, Bungie revived the concept and attached it to the M319 grenade launcher by holding the right trigger to fire an EMP round, and releasing the trigger to detonate it.

Drawings of weapon and its operation. 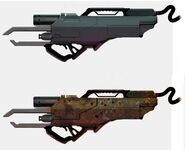 Add a photo to this gallery
Retrieved from "https://halo.fandom.com/wiki/EMP_Rifle?oldid=1653930"
Community content is available under CC-BY-SA unless otherwise noted.