The Energy Dagger is an energy melee weapon employed by the Sangheili, particularly the Zealot classes, during the Human-Covenant war. It is mainly used for assassinations by player-controlled Elites. Other uses include hostage killing and door hacking.

The design bears resemblance to a half-sized Energy Sword, but ends in a single point rather than in dual prongs. It is mounted to a device worn on the wrists of the user. 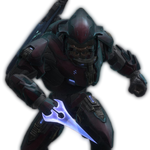 A Sangheili with Energy Dagger extended.

The shadow of a Spec Ops Sangheili using Active Camo. The Energy Daggers can clearly be seen extending from the wrists even without performing an assassination.

An Energy Dagger used in an assassination.

A Zealot uses his Energy Dagger.

A glitch that deploys both Energy Daggers.

Placement of the energy dagger in the neck, severing some major arteries.

Placement of the double dagger assassination, the blades seem to touch each other inside the body.

A close-up of the energy dagger.
Add a photo to this gallery

Retrieved from "https://halo.fandom.com/wiki/Energy_Dagger?oldid=1814336"
Community content is available under CC-BY-SA unless otherwise noted.