Epilogue is the final cutscene for Halo 4. It shows how John is saved after the end of the mission Midnight and how he is moving on after the death of Cortana. The Ur-Didact is also heard giving a speech.

Cut the debris field left of the Mantle's Approach, gradually coming into focus. Next cut to John, floating above Earth, not moving at all. A searchlight shines on John's body, who looks up slowly to see an approaching Pelican.

The Pelican's back door opens. Cut to aboard the Infinity, where SPARTAN-IVs and Marines stand in formation to await Master Chief. They turn and salute as John steps out of the Pelican.

Establishing shot of the Infinity. Cut to John standing at a window, looking down at Earth below. Thomas Lasky comes from behind.

The two face out towards Earth.

John turns to look at him, then turns back. He does not respond.

Lasky walks away. John looks to see him go.

Open on the city of New Phoenix. The sound of a Pelican can be heard in the distance.

Cut to within the deserted city. Smoke rises from piles of ashes on the streets and there are many abandoned cars.

Two Pelicans fly over the street.

The Pelicans land. Several Marines exit troop bay. They secure the area, but slow down to realize the city is empty. One of them examines a pile of ash on the ground with his instruments. He looks up and away in the horizon; the entire city population is dead.

Cut to John-117, slowly walking down a hallway in Infinity. Fade to black.

Fade to the SPARTAN-IV armory in Infinity. Numerous personnel and SPARTAN-IVs are seen below.

Cut to SPARTAN-IVs being armored by machines.

Sarah Palmer and another S-IV, who is running on a treadmill, turn to see John. The running Spartan almost trips in the process.

Palmer walks forward to approach John. Cut to John, walking right past her. His size dwarfs hers.

John walks to one of the machines, prepared to take off his armor for the first time in years. Personnel and S-IVs in the area gather around his station and watch. He steps in it while technicians around him prepare its devices.

The technicians free the bolts to his arm plates, allowing them to fall off.

The machine frees John's chest plate, also allowing it to fall. The chest plate hits the floor with a large thud.

John's helmet begins to de-bolt as machines begin to lift it off.

John's helmet is lifted off. On any difficulty below Legendary, beneath the helmet there is only black. On Legendary, however, John's adult face is revealed for the first time. All that can be seen is his brow, cheekbones, and bridge of his nose, while his eyes are shadowed. Cut to black.

John having his armour undone. 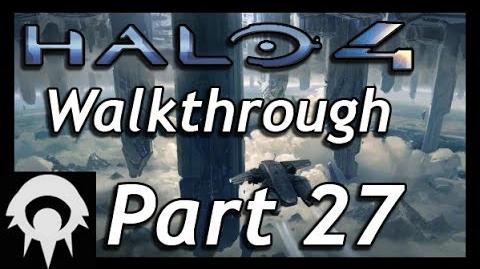