Epitaph is a multiplayer map featured in Halo 3. Situated in an enclosed Forerunner "Cathedral," this asymmetric map is best for free-for-all gametypes, such as Slayer, King of the Hill, and Oddball, and small team games, such as Team Slayer and One-Flag.

Epitaph is set in an enclosed, cathedral-like Forerunner structure that is over a mile tall(at about 5,385.64 feet),[2] with a ceiling vaulting nearly 200 feet into the air, and may possibly be located on the Ark. A mile below, a massive desert stretches out beneath the player. Shining, metallic paths fan out in numerous directions, possibly roads. Far off to the east an immense storm rages, where lightning flashes occasionally. The structure's blue-green glowing "windows" are actually made up of holographic Forerunner text symbols. It is lined with corridors, Gravity Lifts, and shield doors, forcing rapid-paced, corridor-based combat. It towers above a virtually endless wasteland, although careful inspection will reveal metallic-like ribs jutting through the sands below. Though not featured in Team Slayer, Epitaph is played primarily in Team Doubles, Lone Wolves, and SWAT variants, where the primary gametypes include Slayer and the occasional Oddball gametype. The map is semi-symmetrical, modeled in the relative shape of a cross or plus sign (or possibly a tombstone cross, which would be suitable with its name), with a "base" at either end. These bases are essentially enclosed, with a spacious gap in the center that forms the primary cathedral area.

To either side of the bases are stairways that lead to a pair of raised tunnels, one on each side of the cathedral area. However, they are separated from the open space by a wall, preventing players in the tunnels from overlooking the cathedral space. Situated in each "base" is a gold-colored lift, similar to the main lift on Construct. One of the lifts ejects players into the air, toward the center of the cathedral area, where a floating platform with a Rocket Launcher wobbles. This platform is reminiscent of the platform on the Halo 2 map Midship, though much smaller in shape and size. Only two pieces of equipment exist on this map: the Power Drain (found by the main Gravity Lift) and a Bubble Shield (found on the opposite side of the map).

The main hallway in Epitaph is split into two bases, one of which bears a large and mysterious golden hologram, which has been the subject of many rumors. On one end of the level, a Gravity Lift propels players to the Rocket Launcher platform, while the opposite lift only carries players to the upper level. Two smaller gold-colored gravity lifts (one on each side of the main section) also send players to the upper levels of the cathedral. A plethora of weapons and grenades can be found on the upper and lower levels of this main section, including Maulers, Needlers, and Brute Spikers.

A series of catwalks and ramps exist on either side of Epitaph's outdoor section. These catwalks run parallel, and perpendicular to the main hallway section of the Inner-Cathedral, and thus exist on the "light side" and "dark side" of the map. Since this map is semi-symmetrical, the catwalks on either side are similar, but not identical. The commonality shared between these two sides is that they all connect to the Inner-Cathedral through a series of doorways and shield doors. While technically not a power weapon, the Shotgun exists on a ledge of the "dark side" catwalk, beside a Gravity Lift leading into the map's interior. This section, known as the "corner of death" is a common place for players to camp. Players will wait just out of view around the corner for an unsuspecting player to come looking for the shotgun.

On a lower ramp on the "light side" catwalks, players can find active camouflage power-up, offering a clear advantage in the cramped spaces of Epitaph. Players can also find Maulers on the ramps, as well as Plasma Rifles. This map also features Spike Grenade's, and a number of them can be found on both the interior and exterior of the map. It is interesting to note that the Spike Grenade does adhere to the shield doors in this level. In addition to quickly accessing the upper and lower levels of the map, players can drop down onto the lower catwalks from the top, by carefully jumping down. There is also a small opening on the upper ramp on the "dark side" that allows players to drop down onto the lower level.

Epilogue is a Forge-altered variant of Epitaph added to matchmaking on September 23, 2008. 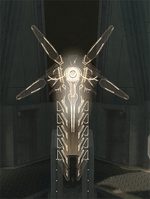 The strange hologram, which bears similarities to Guardian Sentinels that were cut from the final game.

Light Side exterior of Epitaph's catwalks.

The entire structure Epitaph is built on when viewed from several hundred meters away. Note the Cathedral is at the top.

Overhead view of the Forerunner structure, which is attached to seven paths 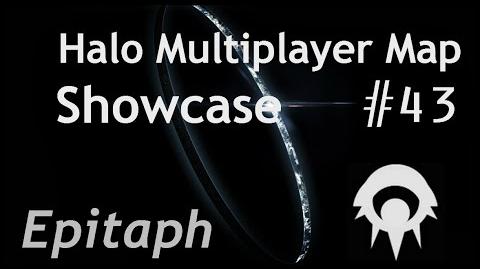