The Eridanus Rebels utilized everything from upgraded Pelican dropships to Mako-class corvettes to Chiroptera-class stealth vessels as an improvised fleet. They had at least a hundred such vessels in their fleet at any one time. They also had a supply line consisting of Parabola-class and Laden-class freighters. They received almost everything in their armament and ships from pirating other vessels, even if it would be a civilian craft, or a lone UNSC vessel. Their ability to infiltrate the UNSC ranks caused the UNSC to keep a small orbital force in the system to respond to rebel attacks. Another reason for their success was their location, which was extremely difficult and time-consuming to discover and was easily defended against even medium-scale assaults.

Around 2511, the Eridanus Rebels had overthrown the colonial government of Eridanus II, and largely controlled all activities within the system. The UNSC responded harshly, seeking to put down the Rebellion forcibly.

In 2513, a space battle occurred between the Eridanus Rebels and the UNSC, Operation: TREBUCHET. In the battle the UNSC was victorious, but four UNSC destroyers were destroyed in the battle. However, elements of the rebellion escaped into the nearby Eridanus Asteroid Belt.[1]

In 2525, the Office of Naval Intelligence reported that it had uncovered a breach within FLEETCOM: there were several spies for the organization. They had also discovered that the rebels were led by a Colonel Robert Watts and that they had connections to the outside world and were being supplied by outside sources such as the cargo freighter Laden.[2] That year a group of Spartans underwent a covert operation and captured Watts from the very heart of the rebel operations base, the rebel stronghold at Eridanus secundus, leaving many of the rebel soldiers dead throughout the base.

In 2552 the Spartans returned to the belt aboard the UNSC Gettysburg-Ascendant Justice vessel to make repairs. Governor Jacob Jiles was the leader of the rebels at that time. A brief "showdown" occurred with Vice Admiral Whitcomb in which Whitcomb threatened to fire the plasma turrets of his ship, while Jiles threatened to launch a nuke at Ascendant Justice. After a "truce" was made, the two sat down and discussed what was going to happen next. Suddenly, a Covenant cruiser that had followed the trail of the vessel appeared in the system. As it turns out, Whitcomb's plasma turrets were all duds except one and Jiles' nukes were fake ones radiating signals. After a short fight, the Covenant ship was destroyed with severe damage done to the Gettysburg-Ascendant Justice. Several days later three dozen Covenant vessels appeared in the system, forcing the Gettysburg-Ascendant Justice to jump to slipspace. Afterwards, it is likely that the dozens of Covenant ships eradicated the base, emerging victorious over any resistance the Eridanus Rebels could have likely posed. 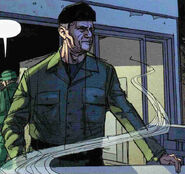 Retrieved from "https://halo.fandom.com/wiki/Eridanus_Rebels?oldid=1790370"
Community content is available under CC-BY-SA unless otherwise noted.