Erosion, also known as War Games Map_Set/: 773-9,[1] is a Forge environment available in Halo 4. This map takes place inside a cavern which has two man-made structures and terrain which naturally slopes down.[2]

This map houses two structures by default, of which one is a Grifball court and the other is a pumping station constructed on an overhang. The map features natural ramps and small caves, and offers multi-leveled terrain.

Beyond the second man-made structure, there is small lake over which players can Forge. Furthermore, players can also forge underneath the previously mentioned overhang. There are three maps forged on Erosion that are featured in Halo 4 multiplayer. These three maps are as follows: Temple, Sarges Lab, and Pumping Station. There are also two forge-made maps made on Erosion that are shipped with the game: Ascent and Grifball Court. 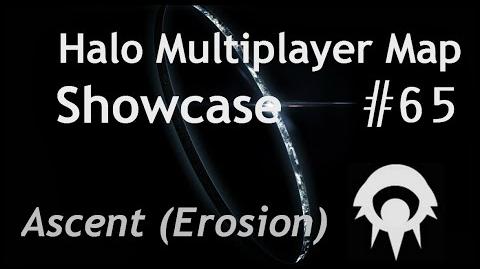 The central land area of Erosion.

The natural ramp in the center of the map.

The far reaches of the map.

The ceiling of the map, right above the Grifball court.
Add a photo to this gallery

Retrieved from "https://halo.fandom.com/wiki/Erosion?oldid=1790375"
Community content is available under CC-BY-SA unless otherwise noted.