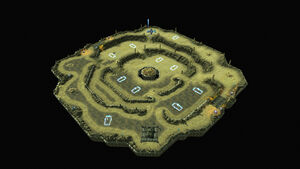 Exile is a Halo Wars multiplayer map.[1][2] It has three starting bases, which are occupied by the Flood if playing on 1v1 or 2v2. There is what appears to be a Flood Colony Form in the middle, though you cannot destroy it, and it also cannot destroy any of your units. The Map also features four Forerunner Reactors, as compared to being occupied by the usual Rebels, they are now occupied by Infected Marines and/or Infected Jackals.

Using this map's bonus reactors is a key feature to winning the battle. Covenant players should instantly seek to claim the bonus reactors with infantry, using their Leaders to clear the area out first. This means that the Covenant player no longer needs to spend 3000 supplies researching, Age of Doubt or Age of Reclamation, and can therefore upgrade their leaders and access the most powerful units early in the game. In 3v3 games, players who spawn in the center bases should be ready to defend themselves immediately in case of a possible enemy "rush," and should therefore focus more on units than on supplies until they have a suitable defense. Often, turrets can be a good defense against early Warthog rushes. Conversely, you might want to immediately attack the player opposite you if you do spawn in the center. Finally, this map generally favors air units, and therefore players should seek to train Hornets/Hawks if they are the UNSC; Covenant players should therefore seek to train either Banshees or Vampires, as these air units can maneuver around the map easier than map ground units can, however, the Covenant Scarab is extremely useful for traveling over the rough terrain.

A strategic map of Exile.