For other uses, see Exodus (disambiguation).

Exodus is the seventh campaign level of Halo: Reach.

Noble Six stands before the crashed Long Night of Solace, having fallen from orbit. After wandering through the wilderness, Six arrives at New Alexandria, where the Covenant, supported by four Covenant corvettes, are fighting against the outnumbered and outgunned UNSC forces. Staff Sergeant Pete Stacker orders missiles to be fired at the Corvette, but to no avail. Noble Six must find a way to stop the attack before the entire city is glassed.

Noble Six then finds a way through the city and links up with Army forces to assist in the evacuation of Traxus Tower while fighting Brutes. However, they arrive too late, as one of the corvettes has already moved into position above the tower.

Noble Six acquires a jetpack and joins a group of ODST specialists known as the Bullfrogs, enacting an emergency plan to capture an executive landing pad. Six then proceeds to Traxus Tower, where he/she and the ODSTs take the landing pad, allowing a group of civilians to evacuate in a Pelican.

Leaving behind the ODSTs and a couple of UNSC troops to bring more civilians to the landing pad, Noble Six mans a Falcon's turret to provide air cover for evacuation craft leaving the city. They take an alternate route to avoid Covenant forces clustered in the middle of the city.

After an evacuation transport is shot down by a corvette, Noble Six assists Army forces in clearing the way to missile batteries further in the city. The missile batteries disable the corvette's weaponry, allowing the remaining transports to slip past and escape the city.

Kat contacts Noble Six and instructs the Lieutenant to rejoin the rest of Noble Team. During the exchange, Noble Six alerts the team to Jorge's sacrifice during Operation: UPPER CUT.

Noble Six, alone on a snowy landscape, holding his/her left arm, regains mobility. Six slowly walks back to the Reentry Unit to acquire a pistol. Six then looks up at the remains of the Long Night of Solace, crashed on a distant mountain range. Six begins walking away from the wreck with a noticeable limp.

Fades in. Noble Six, now in a more temperate landscape, jogs closer to a cliff. He/she stops at the top, and New Alexandria, with three Covenant corvettes over it, comes into view. Explosions fill the sky, and the sound of intense combat is heard in the distance.

Six lets Jorge's dog tags slip slightly from his/her hand and places them in a chest pouch. Skips to a building's rooftop on the city outskirts. Six, still holding the pistol, creeps beside the edge, jumps down, and staggers slightly on his/her injured leg. He/she walks past plasma scarring on the wall and readies the pistol. He/she jumps down again on to a walkway.

Switched to Six's point of view: He/she lands safely on the street and looks toward the road up ahead.

The Devil His Due

Six enters a damaged building, and exits out the other side. Six engages some T'vaoans, then enters another building nearby.

Six enters the basement and engages more suicide Grunts. Six easily dispatches them and exits the building. Outside, a Spirit dropship open its troop bay, revealing Brutes inside.

Six and the Troopers defeat the Brutes.

Jiralhanae and T'vaoans pour out from the entrance to the tower. Six and the Troopers defeats them.

Loud public announcements are broadcast over the room periodically.

Six and the Troopers move to the elevator and defeat nearby hostiles. After the battle, Six activates the elevator, but nothing happens.

Six and the Troopers engage and defeat the reinforcements. The elevator finally arrives.

Six enters the elevator and activates it.

The elevator stops and the doors on the opposite side open. Six walks out.

Too Close to the Sun

Six walks past some wounded civilians and out the door. Some ODSTs are attempting to clear the skies.

Six acquires a jetpack from a makeshift armory.

Six and the Bullfrogs jump to the nearest platform.

Six and the ODSTs jump from platform to platform until they arrives at the port, where they engage hostiles.

More ODSTs assist Six. They defeat all the hostiles on the port. Six advances to Traxus Tower.

Six jumps on a walkway in the tower.

Six gets to the top, where he exits the tower. He sees two ODSTs and some Troopers engaging Covenant forces, while civilians stay behind cover.

Six and the ODSTs advance and start climbing up the tower, followed by the Troopers and civilians, engaging multiple contacts on the way. After a while, they meet up with more ODSTs. They head up to the top and into the executive wing, where multiple Brute Chieftains are commanding a large contingent of Covenant infantry.

Six and the ODSTs engage the troops inside and finally destroy the two turrets outside, securing the landing pad.

The ODSTs salute Noble Six, as two Falcons and a Pelican land on the pad.

Six mans a turret on one of the Falcons. The civilians take the Pelican.

I Should Have Become A Watchmaker

The Falcons fly across multiple engagements between UNSC and Covenant infantry around the city outskirts. Noble Six assists the battered troops with the machine gun.

As the Falcon gets closer to the starport, they notice 6 Echo 2 taking off. The corvette over the starport instantly fires on the transport and hits it on the port side with a plasma torpedo, crippling the craft.

The transport crashes into the harbor and slowly sinks.

The Falcon approaches a small park, where two missile batteries are placed. The Falcon lands at Duvall's position, where Troopers are engaging Covenant infantry. Six assists with the turret, finishing the attackers off.

The Falcon lands on the beach. Six joins Duvall's fireteam.

Six and the Troopers advance to the beach.

Six works his way to one of the batteries.

Six defeats the enemies around the battery and activates it.

Six moves to the second battery and activates it.

Six goes to the compound, engaging a multitude of Covenant, including two Brute Chieftains.

Six missiles shoot up into the sky, aiming for the corvette. The missiles hit the corvette as a civilian transport flies overhead.

Six walks to an open area as the three transports speeds over him and into space.

Six throws a signal flare on to the ground. Six walks away as the view zooms out and shows the damaged corvette retreating from the city. 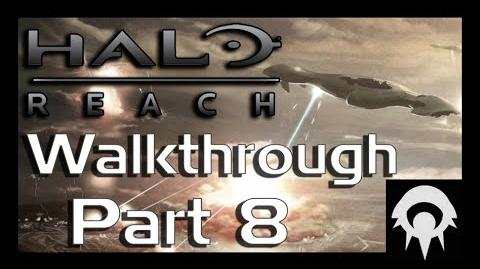 The remnants of the Long Night of Solace on Reach.

A Covenant corvette being damaged by missile batteries.

Civilian transports leaving the New Alexandria Spaceport, with Noble Six in the foreground.

A Corvette over New Alexandria.

Civilians evacuated in a Pelican.

A Brute torturing a civilian.

Noble 6 in a Falcon over Starport.

A damaged Corvette looms over the city.