The Feral Stage is the first phase of a Flood outbreak.[1] In this state, the Flood operates in a very aggressive manner, and their expansion depends on finding sentient life forms and expanding their overall biomass. Victims become hosts to the Infection Forms, and are eventually mutated into Combat Forms, and finally to a Carrier form. During this period of time, the Flood attacks with little to no strategy, seeming to focus primarily on consumption of intelligent beings and biomass and thus expanding and strengthening their own forces.

As was witnessed during the events of Halo: Combat Evolved and depicted in the Halo Graphic Novel, the Last Voyage of the Infinite Succor,[2] at some point during the Feral Stage, the Flood begin to collectively shift their objective. When this happens, Combat Forms will work together to accumulate the biomass of both infected victims and uninfected sentient beings, allowing a series of widespread chemical reactions to occur across the reserves of calcium and flesh they have collected, eventually creating what is known as a Proto-Gravemind. Once a Proto-Gravemind absorbs enough biomass and becomes a fully grown Gravemind, the infection can then proceed into the Coordinated Stage. 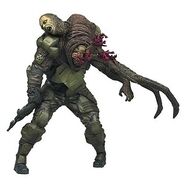 Carrier form
Add a photo to this gallery

Retrieved from "https://halo.fandom.com/wiki/Feral_Stage?oldid=1790446"
Community content is available under CC-BY-SA unless otherwise noted.