Drops Flood Eggs on Enemies
The Flood Bomber Form is an airborne Flood form that was encountered during the Battle of Shield 0459 in February 2531. It attacks by dropping growth pods full of infection forms on enemies. It is usually spawned through either a Flood den, vent or colony. The Bomber Form was the second Flood form in the entire Halo series to be capable of flight, with the first being the Flood Swarm.

The Bomber Form has an abdomen similar to the head of a Flood carrier form. It has two arm-like tentacles coming from the sack on either side of the 'head', and many tentacle-like appendages coming from the mouth. The Bomber Form has a face-shaped appendage with two empty eye-holes near the front of its body. Because most Flood forms do not use eyes for sensory reception, but instead use the sensory antannae on the end of their infection forms, it is likely the Bomber Form was created from creatures indigenous to Shield 0459. It was likely a floating creature before being infected. 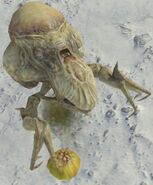 A Bomber From dropping a Blister. 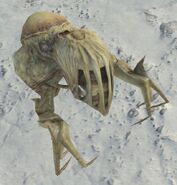 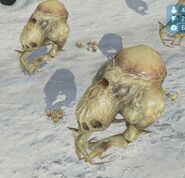 Retrieved from "https://halo.fandom.com/wiki/Flood_Bomber_Form?oldid=1816425"
Community content is available under CC-BY-SA unless otherwise noted.