Can form into Tank and Stalker Form

The Flood Ranged Form is a type of Flood Pure Form from Halo 3. It is formed when a Flood Stalker Form is damaged or chooses to mount itself in a stationary position either on the walls, ceiling, or, with less frequency, on the ground. It has a mouth-like protrusion that opens up to reveal a living missile platform of regenerating spikes.

Ranged Forms are one of the most tedious enemies to deal with in Halo 3. If fired on for a prolonged duration of time, they will curl themselves, shielding their weak point (the head) and gaining heavy resistance against ballistic weaponry, often requiring lots of clips to kill them in this state. Should this happen, it's recommended to use heavy weapons or dual-wielded Plasma rifles, as they will die quickly to them. Ranged Forms attack with deadly accuracy, comparable to a Carbine-wielding Jackal, but much faster. Ranged Forms are usually found with Combat and Tank forms, forcing the player to take cover while their brethren move in and try to flush the player out.

To kill a Ranged Form, sticking a grenade (Plasma or Spike; Incendiary should be saved for Tank forms) will kill them instantly, regardless if they are curled up or not. However, as such grenades are limited, and most Ranged Forms will be firing at extreme distances, this is only recommended if they are in close range. If they are far away, a heavy weapon (e.g Brute Shot) will be needed. The supercombine from the Needler can also be used if grenades or heavy weapons are unavailable or being reserved for later encounters.

For protection, the Deployable Cover is the best equipment of choice against Ranged Forms, as their spikes have trouble penetrating the shield, and using ballistics weaponry doesn't damage the shield. However, as they will curl up if fired upon too much, the cover is best used to scout for where Ranged Forms may be lurking.

If too close to one, Ranged Forms will either convert into a Stalker or Tank Form to deal with the player.

Clinging to a wall

A Profile of a Flood Ranged form 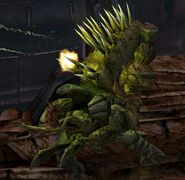 Retrieved from "https://halo.fandom.com/wiki/Flood_Ranged_Form?oldid=1818500"
Community content is available under CC-BY-SA unless otherwise noted.