Flood Biomass encases one or more Flood Forms, helps Flood assimilation by spreading the Flood across a certain area

The Flood Dispersal Pod[1] is a Flood dissemination mechanism seen only in Halo 3 and rarely in Halo Wars on the level Cleansing.

In essence, and in practice, the Flood Dispersal Pod is the Flood equivalent of the HEV drop pods used by UNSC ODSTs and Orbital Insertion Pod used by Sangheili Special Forces. Rather than encasing its occupant(s) in protective Titanium-A and lead, the Dispersal Pod uses Flood biomass to shape the pod and protect the occupant from the stresses of orbital deployment.

Large Dispersal Pods were deployed by High Charity as the Gravemind arrived with its army at Installation 00, scattering Flood forces all over the artificial world, delivering significant numbers of Combat Forms to the surface.[2] It is presumed that the Flood infestation was spread across the unfinished Installation 08. Later, after the destruction of High Charity, more pods were used to deliver Combat Forms to the Control Room of the new Halo built by the Ark,[3] in an attempt by the Gravemind to stop the Halo's activation. They are similar to the Infection Forms in appearance, but obviously not in size. The pod's design might simply be based on captured knowledge of Human Entry Vehicle pods and Covenant Orbital Insertion Pods. It is also unlikely that the pods have a navigation system.

A Combat form getting out of a Flood Dispersal Pod.

A defective Flood Dispersal Pod that did not open up.

A Pod plummets toward the ground

A pod lands, reinforcing Combat Forms already on the battlefield.

A larger pod from High Charity tears through the Shadow of Intent. 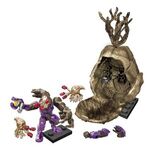 The MEGA Bloks version of the Flood Dispersal Pod.