Floodgate is the sixth campaign level of Halo 3 and the first Halo 3 level in which the Flood appears.

It takes place in Voi, Kenya on the continent of Africa on Earth during the Battle of Earth. Floodgate is the first campaign mission where Sangheili allies other than Thel 'Vadam are encountered in Halo 3. It is also one of the shortest levels in the game.

Shortly after John-117 disabled the Covenant Anti-Aircraft Battery in the previous level, The Storm, UNSC Frigates under the command of Lord Terrence Hood attacked the Covenant controlled Forerunner dreadnought. This assault failed, as the Dreadnought survived unscathed. The Covenant Loyalists then activated a Portal to the Ark, temporarily disabling the Frigates. The remnants of the Covenant Loyalist fleet then followed the Dreadnought into the Portal. With the UNSC fleet disabled, and the Anti-Aircraft Battery out of commission; the Flood-infested Indulgence of Conviction suddenly jumped out of Slipspace nearby and crashed near the Traxus Factory Complex 09.[2]

Immediately after the crash of the flood loaded battle cruiser, the infection spreads around the city, infecting everything in its grasp.

In order to eliminate the infestation, John-117 and Thel 'Vadam had to overload the crashed cruiser's engines, wiping out the entire city and the Flood with it. To do this, they pushed back through the factory where they just came from, fighting many Flood Combat Forms and new Pure Forms. They were then aided by the arrival of Rtas 'Vadum and a Covenant Separatist fleet. 'Vadam and John, along with a Sangheili strike team, pushed forward to the crashed ship. John-117 was later informed by Miranda and Johnson that the Elites "found" Cortana in the ship, and tasked him to recover her. Thel and the rest of the strike force stayed outside to ensure nothing would enter and attack John-117 while he was in the ship. John eventually found Cortana, but it was just a recording. A Combat Form inside surprised him, but was quickly taken down by 343 Guilty Spark. The two were later extracted from the ship.

Once on board the Separatist Assault Carrier, Shadow of Intent, 343 Guilty Spark extracted Cortana's recorded message from the Covenant storage device. This message informed everyone about the flood infested High Charity making its way towards Earth, and that there was a way to stop the Flood. Hood, concerned with Cortana due to her rampancy, decided to bunker Earth's defenses, which Rtas protested as the humans barely survived a small infestation. John and Miranda managed to convince Hood to send forces through to the Portal to stop both Truth and the Flood. During this time, the Separatist fleet glasses Voi and the surrounding area to ensure there were no Flood left on Earth.

It Followed Me Home

To the right, two Marines are seen on a cliff edge, fighting off several Flood Combat forms. They are overrun and mutate into more Combat Forms OR if all of the Infection Forms are killed, proceed back into the factory.

When John and Thel 'Vadam re-enter the city:

At this time, a human Combat Form jumps from the building on the right. Killing it will result in the Fog Skull being dropped.

John finds a Marine squad on a loading ramp.

Infection Forms and Combat Forms descend from above and swarm on the Marines at the ramp, killing, then infecting them, forcing the remaining Marines, John, and 'Vadam to kill them.

The Sergeant becomes mutated by an Infection Form.

A Marine proceeds to attack the reanimated Sergeant.

They fight off the wave of Flood.

The Marines accompany John and 'Vadam into a building, where a lone Marine is running away from a horde of infection forms.

If the Marine is not saved, the Infection Form dives into his chest, gruesomely transforming him into a Flood Combat Form. This forces John-117 and 'Vadam to kill him immediately.

Marines led by Stacker are pinned down behind sandbags with more Flood surrounding the area. John and 'Vadam clear this section of the warehouse.

If the Marines are saved from being killed or infected.

Reaching the other end of the warehouses, the surviving Marines who joined John and 'Vadam hold position after clearing the area.

Upstairs, two Marines, one wielding a Flamethrower, try to combat the Flood as well, but they soon die, leaving the Flamethrower for John or 'Vadam to pick up as they head up there and down a hole in the floor into the office areas.

John and 'Vadam force their way through another wave of Flood, and find a marine huddling in a corner of the large room previously used as an Aid Station, surrounded by three dead marines. The Marine is holding a pistol, and will occasionally aim it at his own head, before lowering it and burying his face in his hands.

With no time to spare, John and 'Vadam continue on ahead to the lake bed.

The Flood. It has Evolved.

John-117 and Thel 'Vadam enter the lake bed of Voi where the Scarab was previously fought and destroyed.

Rtas 'Vadum (COM): "This is the carrier Shadow of Intent."

Rtas 'Vadum (COM): "Clear this sector, while we deal with the Flood."

A Major and four Special Operation Elites leap out of landed Orbital Insertion Pods ahead of John and 'Vadam, fighting against the Flood.

John and 'Vadam make their way to the Elite lance.

John, 'Vadam, and Elites fight their way through the infestation and arrive at the crash site.

Once outside again, a couple of Separatists Phantoms arrive, dropping off more Elite reinforcements to combat the Flood.

John-117, 'Vadam, and the remaining Elites fight past dozens of Pure Forms, Combat Forms, and Infection Forms to the massive, burning hulk of the crashed Flood battle cruiser. Up an incline, an ominous hole resides in the ship's hull, leading to the interior.

Cortana's projection above the holographic unit flickers and then disappears.

Suddenly, the humming of a Phantom's gravity drives are heard, and a Phantom appears over the open chamber. John turns and readies his Assault rifle at it while 343 Guilty Spark floats down from the Phantom, which continues to hover overhead.

John grabs 343 Guilty Spark and pulls him away from Cortana's storage unit.

The view cuts to an aerial one over the whole town of Voi at a high altitude. Although clouds obscure the surface, part of the crashed Flood-controlled cruiser is still visible. The Phantom flies away from ship, while two CCS-class battlecruisers of the Fleet of Retribution glass Voi with their Energy projectors.

The view then cuts to an aerial one above the Forerunner Portal. Its 'fins' are open and blue energy streams from their tips to the open Slipspace portal drifting ominously above the construct. Fighting on Earth has ceased, and the Battle of Earth has ended with the departure of the Prophet of Truth's fleet through the Portal hours earlier. Four vessels of the Sangheilian Fleet are gathered above the Portal, and 343 Guilty Spark's Phantom arches to the largest of them: the Assault Carrier Shadow of Intent.

Inside the bridge of the Shadow of Intent. Elites and humans are gathered around a long holographic table, with Shipmaster Rtas 'Vadum floating on a gravity throne at one end with his Elite attendants, Master Chief and Thel 'Vadam in the middle, and Fleet Admiral Hood and Commander Miranda Keyes at the far side of the table. All are silent except 343 Guilty Spark, who is bobbing at the center of the table and interfacing with Cortana's memory unit with his projector beam.

Coincidentally, the storage device works again, and a holographic projection of Cortana springs up.

343 Guilty Spark jolts the device with another beam.

Suddenly, Cortana's skin lights up. She clutches her head, gasps in sudden pain and collapses onto the "floor."

Cortana's recording ends, she is left staring with desperation at John.

Elites around the room raise their forearms and roar in agreement.

While Hood and Keyes argue, John-117 bends down and observes Cortana's pained, frozen figure, still collapsed on the holographic table.

Lord Hood turns, looks wordlessly at Miranda Keyes, and then exits the bridge.

Inside the Shadow of Intent's hangar bay, both the Elites and the UNSC are getting ready for battle. While a Separatist Phantom drifts into the hangar on the far side, two M12 Warthog LRVs race to the Forward Unto Dawn's loading bay, drawing near a group of Marines clustered around some UNSC crates. At uneasy rest opposing the Marines is a Major sitting on a Ghost, along with a few SpecOps Sangheili. The Major's Particle Beam Rifle is resting next to the Ghost. Sergeant Johnson, with his arm full of "stolen" Covenant Carbines brushes past the wordless Elites, stopping only to scoop up the Major's rifle. The Sangheili, resentful at this non-permitted collection, rise challengingly around Johnson. Johnson ignores them and continues walking.

Nearby, a pair of ODSTs are joking with each other when Thel 'Vadam passes by, with an acquired M41 Rocket Launcher over his shoulder and a Flamethrower in his left hand. The ODSTs and a pair of nearby Marines watch 'Vadam in awe, when 343 Guilty Spark drifts through the Marines in tow behind 'Vadam, leaving a Marine speechless. Johnson rejoins the Marines, and begins to hand out Carbines.

The scene cuts to the fore of the hangar, where a Pelican Dropship lays before the hangar's energy field. John and Miranda Keyes stand at attention before Lord Hood, who looks at them grimly from the rear of the Pelican as the troop bay door shuts and the Pelican takes off. Keyes glances at John wordlessly, and the two leave, going off to their own business.

Hood's Pelican arcs away from the gathered Sangheilian Fleet as the Shadow of Intent powers its engines and thrusts into the Portal, followed by eight Cruisers, a Carrier, and the UNSC Frigates Forward Unto Dawn and Aegis Fate. 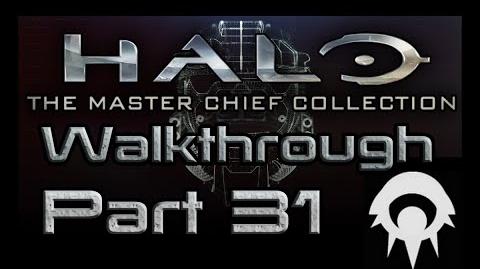 The Shadow Of Intent leaves Earth via The Portal.

A Marine under attack by Flood Combat Forms.

John-117 shoots a Infection Form off the Marine just in time.

Lord Hood grimly watches Miranda Keyes and Spartan-117 as his Pelican departs from the hangar.

Thel 'Vadam converses with a Sangheili Major about the Flood.

An image of a Flood Tank Pure Form.