Forerunner is the third campaign level of Halo 4. It was first announced along with the achievements for Halo 4.

Master Chief has now started to pick up the UNSC Infinity's signal, but it is reading from the interior of the planet. Cortana and John decide to find the mass transit system to reach the interior of the planet. They reach the interior to only find a satellite in the direct center of the planet. Cortana then realizes that it can be used to send a signal to Infinity to warn them about the gravity well, but two different energy pylons are scrambling the message. They then proceed through a portal to the first pylon where they find various Prometheans guarding it. After defeating the enemies, they shut down the pylon, boosting both the signal and the ability to send the message. They then precede to the next pylon, only to find that Covenant cruisers have made their way inside and are fighting the Prometheans. The two shut down the second pylon and race to the satellite to send the message. They reach the controls and try to send the message, but instead release the Ur-Didact.

Fade from black. There is a flash as John exits the portal from the previous level into a hallway-like room.

John exits the hall onto a platform with a console on it, from which what appears to be the planet's core can seen in the distance.

John walks up and inserts Cortana's data chip into the console.

Cortana's avatar appears on the console and she looks around.

John removes Cortana's data chip and places it in his helmet.

John walks to his left and goes through the portal.

He emerges in some kind of tunnel.

John walks to the end of the tunnel and several blue- lit dog-like constructs scatter up the rock cliffs and out of sight.

John walks on until he comes to a wide clearing. One of the constructs that had previously been in the clearing, with blue-lit spines, leaps over a rock and fires followed by others climbing down the walls.

John activates a light bridge and moves through a rock crevice.

(NOTE: The following sequence can only be seen in single-player.)

John looks up as a one of the constructs from the Terminus pounces on him from above. Its face splits apart and reveals a glowing human skull. John punches the construct in the face and kicks himself away from it, The construct then snarls and folds its limbs inward, teleporting away.

As John rounds the next bend several of the humanoid constructs can be seen teleporting along the ridgeline.

John moves through the a Forerunner tunnel and a series of rocky clearings encountering Promethean resistance on the way. He soon reaches a circular platform and a distorted video image of Captain Del Rio appears on the HUD.

John clears the area of Promethean forces and his HUD becomes distorted by static.

John proceeds up and behind a structure, then moves through another passageway and exits at the pylon structure.

When John finds the first core:

John moves up the tower.

An image of Infinity and Requiem appears on the HUD.

John heads to an elevator and starts to ascend the pylon. An image of Del Rio flashing the Reclaimer symbol appears.

The elevator reaches the top of the pylon and John heads towards the beam console.

John grabs the handle with one hand and pulls, slowly twisting the handle.

John slams the handle back into place and the beam shuts down.

A portal opens and John passes trough it.

John exits the portal at same platform he started at. A portal now opens to the right and several Covenant cruisers exit from slipspace and head to the right pylon.

Enemy of My Enemy[edit | edit source]

John enters the portal and exits in a hall similar to the last.

John heads down the path, eliminating groups of battling Prometheans and Covenant. He makes his way through a clearing with a crashed Phantom and heads through a tunnel.

John reaches the forerunner tunnel and moves through it.

An image of Infinity approaching the planet appears.

He destroys the first core.

He then destroys the second core.

John ascends the pylon and enters the elevator.

John grabs the handle and repeats the same cycle as the previous tower.

John returns to the main platform.

John enters the next portal and comes out at the satellite.

John opens a door and heads up to the next area into a firefight. A damaged Phantom crashes into the Promethean's position, killing them all. John continues though various enemies and comes to a large outdoor staircase.

John fights his way to a raise platform with two small pillars bearing the Reclaimer symbol.

John places his hands on both pillars.

John watches as the satellite echos his message.

The satellite ominously starts to rise. The Covenant and Prometheans cease fighting and turn to watch.

John vaults over the wall to his left and takes cover as the satellite releases a sonic wave, knocking over Prometheans and Covenant alike. A small platform descends from the satellite, and it opens to reveal the Ur-Didact. He stands and flexes as his warrior armor forms over his body.

He waves his hand over the Knights and their lighting changes from blue to orange as they reprogram while the Sangheili bow down to him.

The Didact looks towards John's position.

John stands and levels his assault rifle as his cover desintegrates. The Didact telekinetically grabs him and pulls him over.

The Didact's helmet closes over his face.

​John is thrown against a pillar and tumbles to the ground. He struggles to get up. The Didact disappears into the satellite.

John runs as the satellite vanishes. Cut to black.

Fade from black. John wakes up in the rubble.

John starts to get up and sees the Slipspace portal where the satellite used to be.

Two Phantoms collide and crash opposite each other. John shields himself from the blast.

John speeds away on the Ghost as the core falls apart around him.

John jumps into a portal to Requiem's surface.

The portal opens on a barren cliff and John speeds out on the Ghost, heading for the edge.

John swerves the Ghost sideways, swings out of his seat, and kicks himself away from it. He watches as the alien craft tumbles over the edge and explodes.

John looks up as the Infinity slowly emerges from the clouds and passes over them, strange electricity ripples over the ship.

John turns and looks as the ship descends to the jungle canopy.

All of a sudden the Didact's cryptum rises into the air behind John. It scans the the area and boosts towards the jungle.

John unholsters his assault rifle and starts to walk. 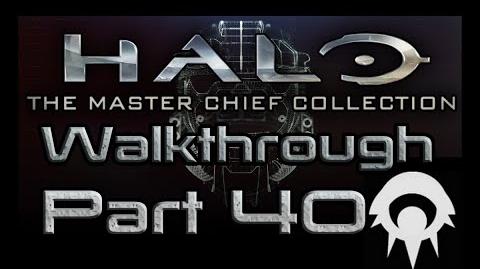 Retrieved from "https://halo.fandom.com/wiki/Forerunner_(level)?oldid=1817621"
Community content is available under CC-BY-SA unless otherwise noted.