Forge Island, also known as War Games Map_Set/: 230-1[1], is a Forge Environment in Halo 4. It was originally meant to be released for download on April 11, 2013, but for unknown reasons was released early, on March 29, 2013. It can be downloaded for free from the Xbox Live Marketplace.[2]

Set within the "Great Anvils," Forge Island features three plateaus, each one different in size (small, medium, and large) sprouting high above a glistening blue ocean. Far off in the distance, massive mountains rise. These three playspaces, the open air around them, and the surface of the water below are to be used by players to create their own custom-made maps in the game's Forge mode. Forge Island features a unique placeable object called the Green Screen, which is essentially a large green rectangle. It is unique to Forge Island and is most likely to be used for Machinima in Halo 4.

Many of the Forge pieces available in Forge Island have been retextured from the pieces that are available on Erosion, Impact, and Ravine, to give a lighter, more plain appearance to them. 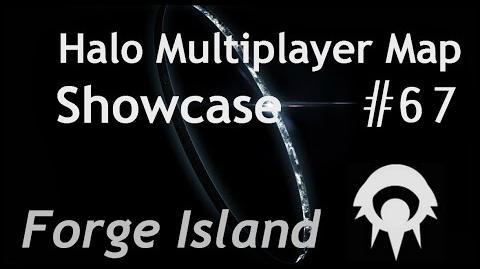 Another view of the three islands