Hemorrhage is a Forge variant of Forge World. It is a remake of Blood Gulch from Halo: Combat Evolved with some elements from Halo 2's Coagulation built into the Canyon.[1] Specifically, the bases (which are Forge pieces) are taken from Blood Gulch but with a few minor adjustments, while the terrain is a direct port from Halo 2's Coagulation, scaled to match Halo: Reach and given a higher-resolution model.

The canyon has two bases: Red Base and Blue Base. Red Base is the further inland base and Blue Base is near the beach. To the right of Red Base and up a hill a little, there is the entrance to the cave with water in it. The other exit to that cave leads to the exit of Red Base's teleporter. You can follow the path up another cliff into a small tunnel that leads to another cliff that overlooks Blue Base. To the left of Red Base is the sniping cliff that then leads to Blue Base's teleporter and an overview of Blue Base. The middle of the map is very hilly and the lowest points are filled with water. There are also rock formations that are scattered around that can act as cover. Behind Red Base is a large open hill that leads to a Forerunner wall.

In order to survive in this deadly environment, you're going to need all the weapons you can get. From the caves of Hemorrhage to your own base, you can find the locations of all the weapons on this map here.

Because of the unique shape of this map, many players find using vehicles to be a clear path to victory. But beware! Although vehicles play a vital part in many strategies, remember that your enemies will know the uses of their vehicles just as much as you do.

Given that there are no airborne vehicles on this map (save for some specific gametypes), perhaps the fastest way to traverse the map, aside from teleporters, is piloting Covenant vehicles and utilising their boost function. This can be used to cross the valley in a matter of seconds, and is also helpful for splattering any inattentive pedestrian enemies you come across.

To the right of the red base, by the flooded cave, it is possible to climb up the mountain without any armor abilities, useful in games such as Slayer Pro and Invasion slayer, where you don't have jetpack. Climb up the first big rock, then on the cliff, a thin rock can be seen jutting out. Jump to it, and walk along the wall. Jump up to the next big rock, and then walk up the steep narrow path. You will find yourself on a long, flat cliff. Since you are very well hidden, you can bring the sniper rifle up with you and snipe as many enemies as your ammo clip will allow. Even if you are found, you can simply eliminate any enemies who attempt to scale the rock face to your position, before they reach you. However, beware of grenades they throw, as those could still damage you.

In CTF a few teams will pile Warthogs, Mongooses, and Ghosts onto the flag to protect it. A few grenades are the perfect solution to this.

Changes from Blood Gulch and Coagulation 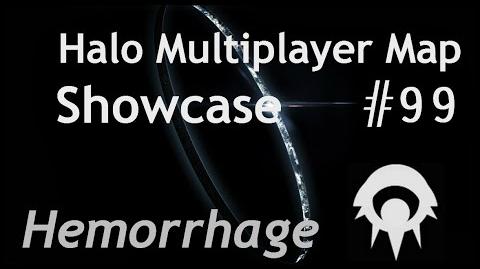 A preview of Hemorrhage