Paradiso is a map variant of Forge World.[1] Built on the Island, Paradiso features two bases at either end of the horseshoe of the island, with a large neutral building and raised catwalks along the cliff face in the lowest part of the horseshoe.

Paradiso features many different weapons, including the Spartan Laser and Sniper Rifle. The weapons and their corresponding locations are listed below:

Spartan Laser: When you get to the top of the neutral base, follow the long passage out to the edge.

Concussion Rifle: There is one on each of the walkways leading to the teleporters.

Plasma Repeater: There is one Repeater next to the neutral base Mongoose, and one on either side of the bridge to the east.

Needle Rifle: One Needle Rifle is located on the northeastern side of Paradiso between the neutral base and the blue base, and there is also one located in the stairwell of each base.

Turret: There is a turret on the second level of each base.

Needler: One Needler can be found in one of the rock tunnels by the red base, on the northern side of Paradiso. The other is located between the central island tunnel and the blue base, amidst the rocks.

Plasma Rifle: The Plasma Rifles that can be found on Paradiso are found in the bases. There is one Rifle in each of the bases stairwells.

Sniper Rifle: You can find one Sniper Rifle between the blue base and the east bridge, and the second at the north opening to the rock tunnels, behind a large rock.

DMR: There is a DMR in each of Paradiso's bases, except the neutral base.

Fragmentation Grenade: The Frag Grenades can be found in the easternmost rock tunnel, near the southern exit of the central island tunnel.

Plasma Grenade: A Plasma Grenade can be found next to the Fragmentation Grenade in the eastern rock tunnel, and some more are located by the Needle Rifle between the blue base and the neutral base.

If you can master all of the vehicles on Paradiso, you and your team can rule the whole island. Paradiso is renowned for the vehicles that are found here, and is designed for their use.

Mongoose: First off, there are two Mongoose by the red base and by the blue base. The other one is found by the water on the northern side of the neutral base.

Warthog: Both bases have one Warthog equipped with a mounted machine gun.

Ghost: You can find a Ghost in the back of the red and the blue base.

Scorpion: There is one Scorpion on the eastern side of both bases.

Banshee: At the top of the red base and blue base there is a Banshee.

Sniper's Dream: If you search the side of the mountain on the northern part of the island near the central island tunnel, you may be able to find a way up to the marksman's paradise that is Paradiso's expanse of catwalks and ridges. Many find that the Sniper Rifle, DMR, Spartan Laser and Needle Rifle are some of the best weapons to have while on these deadly trails.

Scorpion vs. Banshee: Players that frequent Paradiso know that while the Banshee is perhaps the fastest method of travel on the island, it is also considered the most dangerous. The two Scorpions that can be found on the island are the biggest threat to players who find themselves in a Banshee, and are best avoided. Likewise, teams who play on Paradiso may want to designate a player to operate their Scorpion, to better protect their base.

Front Lines: As players advance to their enemy's base, some of the most popular areas to hold include the eastern bridge, the central island tunnel, and the neutral base. Each of these structures can be protected or attacked in many different ways, but all provide a distinct advantage to the team that controls them.

Car Trouble: As Paradiso is abound with vehicles, many players find it difficult to take out their mobile enemies. Grabbing the Spartan Laser and Concussion Rifle have been found to have the best results for players. Also, most vehicles can be destroyed by a well placed shell from a Scorpion, so they can also be used to get rid of your opposition.

Health Kits: Health kits on Paradiso can be found in all of the bases on the island, including the neutral base. Also, there are two Health kits in the middle of the central island tunnel. 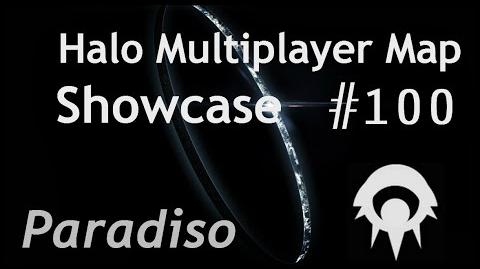 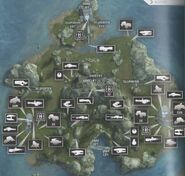 Retrieved from "https://halo.fandom.com/wiki/Forge_World/Paradiso?oldid=1790624"
Community content is available under CC-BY-SA unless otherwise noted.