Pinnacle is a map variant of Forge World. It is a remake of Ascension from Halo 2, built into the Pillar. Some Forge items such as the center dish and "Tower of Power" were created specifically for, but not limited to, Pinnacle. Pinnacle appears in matchmaking in a variety of playlists. The playlists that Pinnacle is located in are Team SWAT, Team Slayer, all objective game modes and is also featured in the recently introduced living dead playlist

There is a huge 'radar' dish in the center of the map that acts as the center point for travel (and conflict), consequently, it is also the least safe area to travel through. Platforms and a few structures that can barely be classified as 'buildings' cling to the edges of the mountaintop, and the provide transit around the edges of the level. Because of the open nature of the level (only the lower platforms on the Rocket Launcher and Sniper Rifle sides of the map are out of sight), Sniper class weapons are highly effective, and any Armor Abilities that can shield or defend against long range weapons fire are quite useful.

If we treat the DMR structure as northwest, there is an open platform on the southwest, a sniper perch in the east, and on a lower level, the Rocket Launcher platform to the 'south'. You can also walk north to reach the Needler, or down the northeast through a very small structure that houses the Shotgun and an teleporter exit. The southern platform holding the Rocket Launcher has both a machine gun and a teleporter egress, because both are static, forced exit routes, it pays to monitor their exit locations if you know someone has just gone for the rockets.

There are two Sniper Rifles present on this map, both on the north side of the level, both also conveniently located with nearby access to either of the two sniper perches on the northwest or east sides of the level. You need to be constantly vigilant for snipers making use of those perches, as they command a clear view of most of the map, and they will rack up a substantial frag lead if you let them.

Other weapons (and medkits) are distributed roughly evenly around the map, but we recommend you avoid the pathway the western platform and the northwestern DMR structure, as you are very exposed on it, and there are no significant key weapons anywhere along the pathway. If you can't get your hands on one of the Sniper Rifles, you can secure a DMR from the northwest or west structures, or on the ground to the south of the center platform. Keeping your distance and picking off targets with the DMR is quite effective, given the open layout of the level.

The Needlers and Shotgun have varying effectiveness. Burn off Needler ammo on targets in the open center, and if you take the Shotgun, try to confine your fighting to the lower northeastern platforms, or the structure to the northwest, both areas where you can force a close range engagement. Grenades are useful for flushing targets out of the eastern or northeastern structures, but don't try to do an open approach simply to throw grenades - just make use of them once you are actually in range.

Sprint is helpful here for moving around quickly, though because all parts of the map are connected to the central section, it isn't absolutely vital for reaching Power weapons quickly. Jetpack is downright dangerous here, you're hugely exposed almost anywhere on the map, and there are very few vertical areas that need to be accessed quickly, the 'finesse' Armor Abilities are all quite useful here. Active Camo, Hologram, Armor Lock, and Drop Shield can all be put to good use. Drop Shield is a bit more useful than Armor Lock for saving yourself from snipers, while camo or Holograms can be used for tricky shenanigans anywhere on the level. 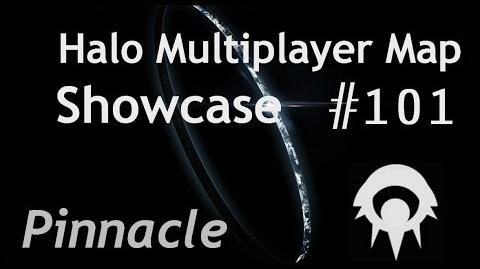 A picture showing both Pinnacle and Ascension.

While playing on infection, standing on the railing allows you to reach anybody camping in the tower.