Led ancient human military against the Flood and the Forerunners

“Once, we were one great race, united in power and concerted in our goals...”
— Forthencho reminiscing humanity's age of flourish.[1]

Forthencho, the Lord of Admirals, was a human senior naval officer who served during the Human-Forerunner war circa 109,000 BCE.[2]

As a senior officer in the prehistoric human empire, Forthencho often found himself at odds with Yprin Yprikushma, who was the political and moral commander of humanity. Yprin concluded that Earth was the homeworld of humanity, but Forthencho, having seen many worlds with ruins of a human civilization dating from before the dark age of technology, believed that the origins of humanity lay elsewhere. He also saw Yprin's decision to move The Primordial to Charum Hakkor as erroneous, arguing that the truths revealed by the Primordial were demoralizing.

During the conflict between humanity and the Flood, and its simultaneous war with the Forerunners, Forthencho tried in vain to convince the human government to use the Flood as a weapon against the Forerunners. Ultimately, his request was denied by Yprin and it made Forthencho bitter to know that the Flood may have been the only hope for humanity to win the war.

As mankind fell back to its capital Charum Hakkor, Forthencho commanded the forces protecting the planet, gaining intimate knowledge of the Didact's tactics and strategy in the process of fighting constant battles. Despite the animosity towards the Forerunners, Forthencho still felt a deep respect for his opponents.

“Lord of Admirals... So very many years have we battled... My Finest Opponent”
— The Didact to Forthencho upon his capture

Forthencho personally met with the Didact after his ship was captured by Forerunner forces. Eventually, he and the other survivors of the human forces were pushed back to the citadel of Charum Hakkor. Finally, planetary defenses collapsed and Forthencho was certain they had lost the war.

The Ur-Didact comforted Forthencho, as he still saw him as a great warrior, showing respect for his tenacity and leadership, and explaining that the library would keep his memories of how he defeated the Flood attack in case they ever returned to the galaxy. As such, Forthencho and other humans were scanned by the composer, dissolving their physical bodies and compiling their minds, to be stored in the DNA of future generations in order to retrieve the secret of how to defeat the Flood in the future.

“You are young. I am old, and I'm dead.”
— Forthencho awakening in Chakas

More than nine thousand years after his death, the personality of Forthencho was inserted into the DNA of a human known as Chakas. His memories began to emerge, including witnessing the destruction of Charum Hakkor due to the use of Forerunner artifacts and recalling the location of the Eternal. Forthencho declined to comment on the events around him, using his knowledge to enlighten Chakas, while showing melancholy disappointment upon learning that the former glory of humanity was lost.

After being captured by Mendicant Bias, Forthencho's memories were, again, withdrawn and attached to a Forerunner monitor. Mendicant promised revenge on their former creators, being helped by ancient humans. Forthencho expressed his excitement at the prospect, but the plan failed when the fleet returned to the Didact at Installation 07. Forthencho's consciousness met Chakas' during the creation of monitor 343 Guilty Spark.

Forthencho's personality continued to exist within 343 Guilty Spark for over 100,000 years until being severely damaged by Spartan John-117 on the incomplete Installation 08.

Forthencho was a large and dark-skinned[3]. He had broad shoulders, muscled, powerful arms and large hands with patches of hair, and a flat, broad head with a large, square jaw.[4]

When shown as a hologram after his personality imprint was extracted from Chakas, he appeared wearing the traditional uniform of high-ranking human fleet commanders of his time including a rounded helmet covering all but his forehead and ears.  Additionally, he had a short coat worn over armor plating with a wide belt secured just below the chest. The uniform also included form-fitting pants and a bulky codpiece, which seemed "more than a little exaggerated" to Chakas.[5] 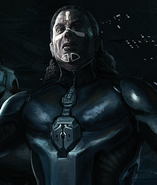 Forthencho restraining his guard from firing on the Ur-Didact.
Add a photo to this gallery