Foundation, also known as War Games Map_Set/: 525-5,[1] is a multiplayer level in Halo 2, based on the Thunderdome levels from the Marathon series.

Foundation is a symmetrical map with two levels; a lower center area and a raised walkway around the edge. There are rooms jutting from the corners of the upper walkway. The proportioned all-around tiers converge on all sides of one another, making a "circle" from a Bird's Eye view.

The layout of weapons on this level is symmetrical, like the map itself. An Energy Sword sits directly amidst four pseudo-buildings in the center. On the lower level, two Rocket Launchers sit beneath platforms opposite each other. There are holes in these platforms to allow players to drop down to the rocket launchers, while an airlift to either side of the launcher allows access back to the top. On the other sides of the ground level, Shotguns sit between two staircases, with a Magnum available on the stair. On the small platform above the shotguns, a Needler under each magnum, a Battle rifle and rocket launcher ammunition can be found. Within the "spur" rooms on the upper level, SMG's can be found.

Early in its release, an auto update was released that made Foundation available for all Xbox Live users. For non-Live users, however, Foundation remains hidden away thanks to a bug in the game. Bungie's intent was for Foundation to appear after you completed the game on any difficulty. Unfortunately, Foundation was only unlocked if you completed a "training event" on the final level (The Great Journey). This was fixed with the release of the Multiplayer map pack on July 5. Another way to unlock Foundation is to:

Foundation should now be unlocked whenever you play with the account you created.

An overhead view of the map

A Spartan on the turret
Add a photo to this gallery 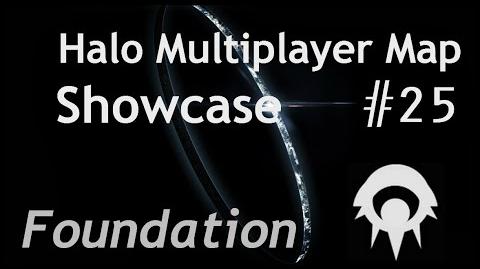 Retrieved from "https://halo.fandom.com/wiki/Foundation?oldid=1790641"
Community content is available under CC-BY-SA unless otherwise noted.