Foundry, also known as War Games Map_Set/: 040-44,[1] (originally coded "Art Vandalay" by Bungie during production) is a multiplayer map released for Halo 3 as part of the downloadable Heroic map pack. It was made available on December 11, 2007. It was made exclusively for Forge, as almost all features of the map can be changed, deleted, or even replaced by any object that Forge has allowed.

There is no set description for Foundry, as it can be Forged into almost any configuration imaginable. Essentially, Foundry is an abandoned warehouse filled with equipment and empty container boxes. The default configuration of Foundry is a mostly close-quarters, two-level map with a few long hallways. The power weapons are distributed into the corners and center of the map. The Rocket Launcher is in the center on the second level, there are Brute Shots in each base, and Sniper Rifles are in the corners opposite the bases.

There are two cranes on this map, as well as two shipping areas: A and B. Most of the boxes have "P425" printed on them, indicating possibly that that section of Foundry is Section P425, or it could be a serial number of some sort. It could also be referring to some destination for the boxes.

Onslaught is Forge-altered variant of Foundry used by MLG. It features a two-leveled base on either sides. The center of the map lends itself to medium-range combat, with a variety of walls and other barriers to funnel players in different directions. A bridge crosses the middle of the map and two walkways connect the bases on either side.

The map has few weapons. Battle Rifles, Carbines and a single Mauler in the center are all that players have access to on this map.

Onslaught is heavily interlocked and in some places, objects have been merged into Foundry's geometry.

Foundry in its default state.

Once outside of the map, you can get a clear view of Factory Complex 71, a structure located near Foundry. 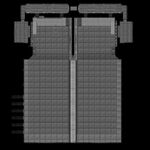 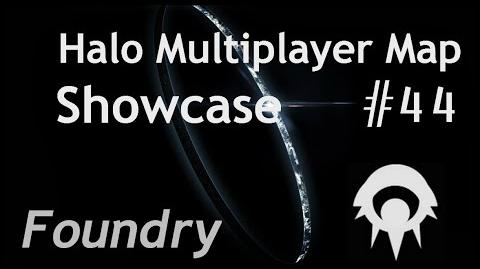