Recently, I sat down (through the internet at least) with Fred Van Lente, the writer of the upcoming Spartan Black comic series, set to be released later this year.

This is my first interview I've ever conducted, so I apologize before hand for the stupid questions, and fanboy-ish-ness XD. 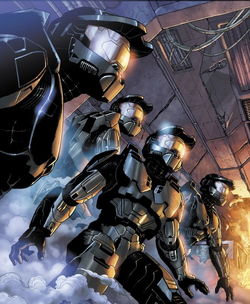 How did the Spartan Black project get started?

It's one of two new Halo series debuting from Marvel after the success of the HALO: UPRISING comic. Marvel approached me about doing it. I write a lot of series for them, including AMAZING SPIDER-MAN and INCREDIBLE HERCULES. I had never played a Halo game before (or owned an X-Box—Blasphemy!!!) but I knew the sterling reputation the series had and was aware of how much care and detail Microsoft had put into the universe. I had been wanting to cut my teeth on an SF book for a while, so I quickly signed on board.

Then I went out, bought an X Box and Halo's 1-3, played through them in what seemed like one feverish setting, read The Fall of Reach and Contact Harvest novels, so now I am a 110% Halo fanatic! Bring on the trivia! Bring on the obscure references! I take on all comers.

What's the story and background behind your new comic? And will it tie into any current properties within the Halo universe?

The Spartan: BLACK team, a Black Ops detail attached to the Office of Naval Intelligence early in the war with the Covenant, is performing a sabotage mission in enemy space when they and a Covenant cruiser crash land on a barren moon. Spartans and aliens must forge an uneasy alliance when members of both parties are captured by the mysterious never-before-seen inhabitants of the moon—and go on a daring rescue mission to seize their comrades back.

As for tying in, Spartan: Black may touch upon one of the more mysterious aspects of ‘The Terminals’ from Halo 3.

The Terminals? Which exact parts are shown in Spartan Black?

Well, that would be telling, wouldn't it? (evil grin)

Who are the four Spartans we saw in the preview pictures, have they been mentioned in previous works, and what kind of ship did they crash on the planet in?

No, the four members of Spartan: Black are brand new to this series, and they're creations I'm pretty proud of—along with their acerbic A.I., Iona.

Spartan: Black is inside a colonial mining ship when it crashes. They are operating under cover via O.N.I. The idea is to have Covenant ships "capture" them, and then, once they're inside the alien cruiser, unleash hell from within.

Many have speculated that these ONI SPARTAN's are of the Class-II, rarely accepted as a canon-source due to their inclusion into I Love Bees, are you using these C-II members due to the limited about of combat-ready Class I still left unnamed?

The members of SPARTAN: Black are from the same generation of SPARTANs as Master Chief, and trained and grew up with him. I followed The Fall of Reach closely in my timeline for them.

In fact, one of the most fun aspects of the Spartan: Black series are the flashbacks to the kind of training Chief and the other SPARTAN "kids" received on Reach, which I believe is something we'll seen visualized for the very first time in the Halo universe. Francis Portela did an exceptionally awesome job on those scenes.

The Mark VI armor seen on Black Team has caused a stir of debate recently, mainly due to the Master Chief only getting his Mark V just a couple days before the Invasion of Reach. Are they sort of a test group for the latest kit made by ONI techies?

As an "off-the-books" unit secret even from the other SPARTANs, Spartan: BLACK has access to experimental enhancements, weapons and armament directly from the ONI high command, and therefore resist rigid classification. So the simplest answer would be "yes."

(EDIT) Frank O'Connor gave me an edit on the armor ""One addition. The BLACK team is wearing prototype armor out of Songnam, Korea. Hence the non-conformity of its appearance. It’s neither Mark V nor Mark VI – but rather a skunkworks protoype." - Frankie's correction on Black Team armor.

I would compare them more to Resistance or British S.A.S. units in World War II, trained specifically to go behind enemy lines and fuck shit up, if you'll pardon my French: sabotage, assassination, infiltration and destruction of high-value targets, et cetera. Hit the Covenant where they live, hit them hard, hit them fast, then disappear before they know what the hell did hit them.

Will we be seeing any familiar characters, units, or locales?

Not that I'm aware of. This story takes place before the fall of the planet Reach to the Covenant and the events of Halo: Combat Evolved.

Many fans are concerned about the canon quality of your new comic, and have gone to conclude that it won't be accepted as a viable canon source. Of course it's a little extreme to think this, though Halo fans worldwide are a little weary of anything not made by Bungie or advised by them.

Well, fans should put their minds at ease. Microsoft’s Halo franchise team is advising me and the whole creative team every step of the way. The raw kernel of this story was generated by Frank O’Connor, and he and Kevin Grace approve all of my scripts and Francis Portela's wonderful artwork, and have given us generous access to their own internal designs for various aspect of the Halo universe, so the fans will definitely see a different aspects of the world they haven't seen before. When I have strayed too far from continuity in my writing, Microsoft has gently set me straight.

And my understanding from Microsoft is that Halo: Spartan Black is canon. Your acceptance of it is mandatory! Mandatory, I tells ya!!!

In previews, you've stated that the Humans and Covenant formed an alliance of sort. How do you plan to include this into the Covenant Civil War?

When they crash, the Covenant and Spartans are forced in a kill-or-be-killed situation in which they have to unite against a common foe. Since each group expects the other to turn on them as soon as the crisis is over, the tension level within this motley band is pretty high, as you might imagine. And the major Covenant characters have just as important storyarcs as the Spartan characters, and dealing with things like the Elite culture and their whole philosophy on existence has been one of the more rewarding aspects of creating the series for me.

If given the chance due to the success of the Spartan Black series, would you sign on to do more with the franchise, such as games, novels, etc.?

Yes, and already have some ideas percolating that I bring to the PTB at Microsoft when the time is right, at their headquarters in Redmond we've dubbed "High Charity".

Finally, will the Master Chief (John-117) make an appearance, and do you have any ideas about when the first issue will be released?

I'd like to thank Mr. Van Lente for this wonderful experience, who's been helpful all throughout getting this posted up. Good luck to you and your new comic book series! I also want to take the time to thank Frank O'Connor who aided me in this process, and to all of you who also helped, I thank you!

Retrieved from "https://halo.fandom.com/wiki/Fred_Van_Lente/Fred_Van_Lente_and_Spartan_Black_Interview?oldid=1681058"
Community content is available under CC-BY-SA unless otherwise noted.