Frozen Valley is a large 3v3 map in Halo Wars. The map is situated on nuclear-winter Harvest, with mountain ranges splitting up the map. Plenty of building sites can be found on this map and a Forerunner Spire of Healing is found in the center of the map. 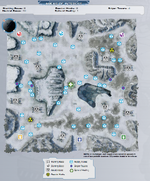 A strategic map of Frozen Valley.