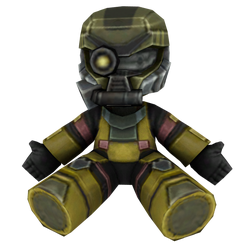 The GRD doll is an easter egg that can be found on every map on the Anniversary map pack, including the Firefight map Installation 04, in Halo: Reach.

The GRD doll was also added as a prop in Forge in the Warzone Firefight content update for Halo 5: Guardians.

On the blue side of the map, behind the main base there are two doors leading into and under the rock wall. Walk into either and follow the hallway to the small room with the teleporter. Looking up, one will see the sky and a small part of the doll. Use either a Sniper Rifle or a DMR and shoot that part, the doll will fall off the ledge and onto the floor, next to the player.

The building with the Ghost and Warthog near it that looks like it's under construction is where the doll is located. Go inside it, where the staircases are and go to the top floor. Look up, just under the ceiling are pipes and beams. The doll is sitting on one of the beams. If one is lucky enough, they can simply throw a grenade or shoot rockets up there. In Forge, the player can turn into a Monitor and fly up there, sit on the beam and melee it off.

Facing the giant glass structure with the Ark portal behind it, turn to the left. Make sure you have a Sniper Rifle, and zoom in as far as possible to the top of the giant Forerunner structure near the end of the left side. Faintly, one will see the end of the doll. If they shoot it, one of two things will happen: the doll will fall forward, allowing the player to go to it; or, the doll will appear to fall backward and then disappear, not respawning until the next round or game.

The doll in this map is by far the easiest to locate. There is a small crate behind a rock, facing the cliff at the end of the map (opposite of the huge waterfall). Inside the crate (It can open if shot at enough, if a grenade is thrown at it or if meleed twice.), there it is.

The doll on this map can be either one of the easiest or the hardest. These two ways can only be used in Forge; go to the Control Room of the map. It is on the top floor on the far right inside the wall. The player can see the doll, using the turret glitch, but only while playing as a Monitor and cannot get to it. The player can use a man cannon of some sort to push the doll out of the wall. It takes time and is hard, but it is possible. This next way is the easiest, and can be used in Custom Games and matchmaking; just press X on the controls near the wall on the stump coming out of the floor. The hatch on the wall will open, push out the doll and the doll will land on the floor. The hatch looks as if it had never opened.

This doll can only be found in Forge. First, find the window that enters a room with many tube-like items. It can be either the clear or yellow-tinted window. Spawn two teleporters, a Sender and Receiver or two Two-Ways. The player should push one through the window and the other next to them. Teleport into the room and, if facing the tubes, walk straight and sharply turn right into a small area indented into the wall. It is there, sitting against the wall, facing the player.

To locate this doll, spawn with a jet pack, which is all the player needs. They can either use a vehicle or walk, and from the spawn area, travel straight and one can see a giant Forerunner door-like structure in the East Drop Zone. To the left of it is a small mountain appearing to have once had a rock avalanche on top of it. Most of the rocks are not actual structures in the game, but only background scenery, allowing the player to walk through them. Behind one of the rocks is the doll alone, "out of the battlefield." So, the player will only have ten seconds to get to it. Using the jet pack, fly up to nearby tall rocks and then to the top of the mountain. It is possible to melee or push the doll off the mountain, but somewhat difficult due to the ten seconds one has to locate it. Alternatively, use a Target Locator to knock it down.

Retrieved from "https://halo.fandom.com/wiki/GRD_doll?oldid=1790692"
Community content is available under CC-BY-SA unless otherwise noted.