It is a Global Water Campaign water purification facility built in the 24th Century that has since fallen into ruins. Its main function was to take melted water from Mount Kilimanjaro, purify it, then pump it to the rest of Africa. It consists of three buildings surrounded by hills and trees. The inside of one building features rubble and vegetation that has overgrown during years of the desolation. The level is a bridge between nature and failed human civilization.[4] It has many levels and open air catwalks with sights down to semi-protected alleys where you can "rain death from above." These catwalks have entrances to the main building as well. Ghost Town is featured as one of the maps in the Legendary map pack.

Starting from the Mongoose in the upper left corner of the image (see overview image in the image section) is one of the two bases (the other is in the bottom right of the image). The “Atrium” area (the building in the upper right corner, indicated with a 3) is a long, lean and overgrown two-story hallway with a catwalk that connects to the Pump Station, a three story building with catwalks that exit to the Interior Base (again in the lower right corner) and second level walkways to the Shotgun (where the Bubble Shield is located). From Shotgun spawn, if players head to the right after coming from the Pump Station, they’ll be able to stay on a path that feeds down to the Overshield and there’s a second level walkway overhead housing the Rocket Launcher and grenades. Directly to the left and under the Plasma Grenades that spawn near the Rocket Launcher is a tunnel that curves behind and empties almost into the area where the number 2 Camera was taken.

The Pump Station’s main room is a bombed out shell of a structure with crepuscular rays filtering through the ceiling - and that top floor has a walkway that leads toward Sniper in the Atrium and a walkway (where the Brute Shot spawns) that leads to the Interior base in the lower right corner. That multi-level base has a few connected walkways that lead to an elevated and dilapidated structure that overlooks Active Camo, and a Gravity Lift spawn and is positioned above a dark hallway that funnels into the Atrium.

For the most part players have quick and dirty methods at their disposal, via quick jumps or equipment to get to the map’s second and third level catwalks and there are long sight lines from the Attackers’ base (Rocket Launcher side) down in front of Atrium and also down the Woods side (Shotgun side).

Ghost Town consists of three main buildings. The buildings are not symmetrical, as it is an asymmetrical map. The defenders spawn in the "Interior Base," seen in the lower right corner of the overhead image, while the attackers spawn in the Tunnel. Originally the attackers spawned in the building, and the defenders in the Tunnel, but it has since changed.

The Atrium: Is a long lean hallway with a walkway that connects to the Pump Station building. The Atrium area also houses the Sniper Rifle. It features rubble and vegetation that has overgrown after years of desolation. Its ceiling is curved and is formed from several small windowpanes.

The Pump Station: A three-story building in the center of the map, with catwalks leading to the Interior Base. It has several entrances, and is connected to the Atrium via a wooden catwalk. On the opposite side of the building it is connected to the area where the Shotgun spawns by a similar catwalk.

The Interior Base: An interior section in the corner of the map. It connects to the Pump Station via a catwalk where a Brute shot spawns, and has an exit leading towards the Shotgun spawn. This is where the Defenders spawn.

The Tunnel: This is where the Attackers spawn. The Tunnel has three entrances/exits, made up of ruined parts of pipes, similar to those running parallel to the Tsavo Highway.

Behind the concrete ramp in the Pump Station, there is a fenced off passageway which can be accessed by spawning a respawn inside. It is advised that you spawn a two-way teleporter node inside upon gaining access. This method can also be used to access the ruined brick building between the Atrium and the Interior Base.

An overview of weapons, grenades and vehicles of Ghost Town.

A Base of Ghost Town.

Face of one of the buildings. 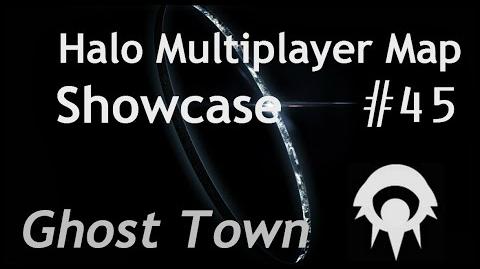 Retrieved from "https://halo.fandom.com/wiki/Ghost_Town?oldid=1790751"
Community content is available under CC-BY-SA unless otherwise noted.