It has two large sections of the map separated by a small mountain range. The only way for ground troops to get to the other side of the map (where your opponent spawns) is by passing a small opening in the middle of the mountain range which is fortified by shield walls in which troops can be garrisoned.

Each side of the map has three areas for the player's bases, and four Rebel controlled base outlets. Aircraft are very useful on this map, as they can simply fly over the mountain range, bypassing the central choke point completely. 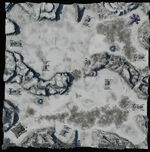