Glacier is a Firefight map in Halo: Reach.[1] The map is set in an underground cave featuring a Forerunner structure. It is taken from an area in the campaign when you defend the outside area of Dr Halsey's lab on the Campaign level, The Package.

For the first month after Halo: Reach's release this map was not available in any Firefight matchmaking playlist and could only be played through the Firefight option on the main menu. However this map was made available for all Firefight Matchmaking modes in the October 19th update.[2]

This is one of the harder maps of Firefight and is best played with at least 2 people. All classes may be present here including the Wraith. Although there is a notable absence of the higher ranking Jiralhanae.

The following are locations on the map that was seen from the player's Heads-up display. 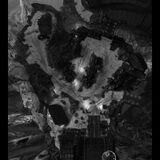 A heatmap of Glacier.

A gameplay screenshot of Glacier.

The level from the Firefight lobby.

A screenshot of Glacier.

Another screenshot of Glacier.