The First Battle of High Charity

For other uses, see Gravemind.

Gravemind is the twelfth campaign level of Halo 2. The level takes place within High Charity, after the Gravemind teleports John-117 there. The Prophet of Truth has the Index, and you must get to him before he leaves for the control room of Delta Halo. As you travel through High Charity, you will experience the beginning of the Covenant Civil War.

Strangely enough, apart from the opening and ending cutscenes, there is no contact with the Gravemind or the Flood. Also, the word "Gravemind" is not mentioned until two levels later in High Charity. This is also the level where the Energy Sword appears most often, and is one of only four missions where there are no Human weapons. This is the first level in which you can use the Brute Shot and the Brute Plasma Rifle. You also fight Brutes for the first time here.[1]

John-117 begins to wake up, and sees a red circle of lights on the ceiling of some underground area. He sees that he's being held aloft by a tentacle, and he is brought towards the head of a massive creature: the Gravemind.

John-117 is held in front of Gravemind's head, the head being one giant mouth made from separate parts, somewhat similar to an Elite's.

As Gravemind talks, he breathes out Flood Spores. Two tentacles bring forth a struggling Thel 'Vadamee.

He raises two tentacles, one wrapped around a red Monitor, the other merged with an infected Prophet of Regret

He lowers his tentacles, and Regret shrieks in fear.

At this moment, 'Vadamee stops struggling against the tentacles. He stares somewhat curiously at the Gravemind.

John-117 and Thel 'Vadamee disappear in teleportation rings. Fade to black, fade in on High Charity.

A swarm of Covenant ships attack each other outside of High Charity. Fade in on the walkway outside the Council Chamber, Honor Guard Brutes guard the gates from Grunt and Jackal rioters.

Cut to Council Chamber. A line of Honor Guard Brutes stand at attention. A cameraman Grunt focuses a holographic camera on Truth as he delivers his propaganda, while the Prophet of Mercy watches from aside.

John looks down at the shocked Grunt.

The Grunt yelps, throws up his Needler, and flees. John-117 catches the Needler and aims it at Truth. Two Brute Honor Guards shield the Prophets with their Energy Stave.

The Prophets and some Brutes escape through a gravity lift, leaving two Brutes behind.

John-117 kills all Covenant in the room

After John-117 fends off the attackers

If you approach where Truth was sitting before:

The Spartan approaches the door, and Cortana's hologram appears.

If you continue to wait:

John-117 fights his way to the ledge where Thel 'Vadamee was tortured.

If John continues to stall

When John-117 reaches the lift.

He takes the Grav Lift down.

John-117 kills the Covenant forces on the top level.

John-117 enters the brig, and kills the guards.

The brig doors unlatch, and the Marine POWs arm themselves with dropped Covenant weapons.

John-117 and the Marines kill the reinforcements.

In Amber Clad flies by overhead.

You can hear the In Amber Clad crash.

John-117 approaches the very large fight in the Mausoleum.

After the room is cleared:

The exit opens, with several cloaked Elites and an Honor Guard Councilor running out. John kills them.

Tartarus and his Brutes take Keyes, Johnson and 343 Guilty Spark toward a platform where the Prophets of Truth and Mercy wait for them, with three Phantoms

Three Brutes do so rather brutishly. Keyes notices In Amber Clad in the tower before being pushed into the Phantom. The two Phantoms take off. Tartarus kneels before the Prophets.

Infection Forms spring up and rush them. The Brutes spot them and they get ready. The Brute Honor Guards throw their pikes aside and stomp on several of them. Tartarus flattens one with the Fist of Rukt. The Brutes manage to shoot or crush most of them, but one gets through and lodges itself to Mercy's throat, knocking him off his throne.

Tartarus turns to Truth in surprise.

Prophet of Truth boards the Phantom and the Honor Guard Brutes follow immediately, but Tartarus hesitates at the dying Prophet of Mercy. He looks at the Index, makes his decision, and turns away from Mercy.

Jiralhanae and Sangheili ships fighting around High Charity. The beginning of the Great Schism. 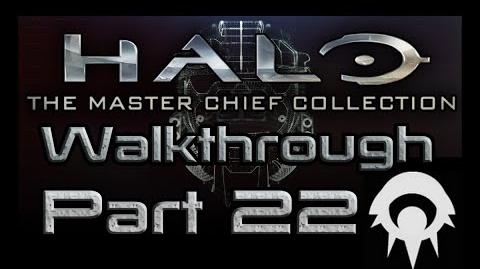