“Give her credit: Gretchen was as tough a Marine as you ever saw.”
— Romeo on Gretchen.

Gretchen Ketola[2] (possibly Gretchen Miles) is a former Orbital Drop Shock Trooper in the UNSC Marine Corps. She is married to Taylor Miles.[3]

Some time prior to 2552, she was assigned to the same unit with Dutch and Romeo. At some point, she and Dutch developed a romantic relationship. She used to enjoy fighting at first, to the extent she actually laughed in the midst of combat. However, she changed when in one mission, she stepped on an Insurrectionist landmine. Her left leg was blown off by the resultant explosion.

Before the Battle of Ariel in 2552, she was still confined planetside because of her injury. She sent a message to Dutch, in which she informed him that there was an open position in a motor pool, and suggested he should take it. It is mentioned she may have taken a job as a teacher.[3]

Years later, Gretchen was offered to become a member of the SPARTAN-IV program. She was outfitted with a prosthetic leg once she joined. This caused Dutch to also step out of retirement and join the program along with Gretchen. By October of 2558, Gretchen and Dutch had been given their own Mjolnir Powered Assault Armor and were in the process of finishing their combat training. [4] 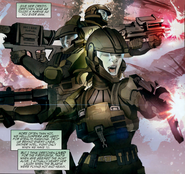 Gretchen with Romeo and Dutch.

Retrieved from "https://halo.fandom.com/wiki/Gretchen_Ketola?oldid=1804537"
Community content is available under CC-BY-SA unless otherwise noted.