Looking for Guardians, which prevent moving outside certain levels' barriers?

Guardian is a Halo 3 multiplayer and Halo Online map.[1] Reminiscent of the Halo 2 multiplayer maps Lockout and Ascension, Guardian is a medium sized level comprised of catwalks and small rooms, which make the level feel smaller than it actually is. Its asymmetric layout makes it great for Slayer and Team Slayer gametypes, while its central platform makes for interesting games of King of the Hill. It consists of visible design elements of both Lockout and Ascension in a jungle setting. It's quite a small map made of walkways, rooms and platforms suspended high in the air making it that if you fall, you die.

Guardian is set in an ancient Forerunner complex surrounded by a lush, dense jungle. The map is multi-leveled, with walkways, and paths connecting all areas of the map. The map is split into four key areas, with the center acting as a connection point between them all. The level is fairly simple in design, so the learning curve is short. It is a very good map for free-for-all multiplayer games.

In aesthetics, the layout recalls a mixture of Lockout and Ascension from Halo 2; it retains the central area and size of Ascension, and its layout and weapon spawns are very reminiscent of Lockout. However, unlike Lockout, the scenery between areas of the map changes noticeably, so players do not get lost as easily.

At one end of the map players can find the Sniper Rifle, an Overshield, and a Needler, hence the name "Sniper Tower." The Sniper Rifle rests against a wall on the bottom level of the "Sniper Tower" (S1 is the callout for this area). On the bottom level on the ledge, players have a clear view to the opposite site of the map and the Yellow Lift, which is a good place to snipe from.

There is a small winding ramp on the tower that leads up to higher ground, and gives players a view of the entire upper portion of the map. To balance the tower out and prevent camping, a Plasma Battery has been placed at the top. Players have access to the Center Platform from above and below, as well as the Green Area via a walkway some players have labeled it as "The Elbow," due to its "L" shape.

In most games players tend to head for the sniper tower as it is a good place to hold off enemies and because of the various views and the sniper rifle.

A common trick is to detonate the Plasma Batteries at the apex of a jump, propelling the player up onto the tree above, and allowing for an unprecedented view of the map.

The "Blue Room" is properly named, due to the soft blue lights giving the room an ambient look. This room is adjacent, but slightly off center from the Yellow Lift and the center Platform. Like the other key areas, it can be accessed from multiple directions. Inside the room, players will find 2 Plasma Batteries. There is also a Flare and a Mauler located here, as well as an SMG on the ramp leading into the room. An archway allows players to jump into the Yellow Lift, either above or below. As players move from the Blue Room to the center, there is an impenetrable glass wall allowing players cover from enemy fire. Players may also travel downward to the lower level. Next to the archway is an L-shaped hallway that leads directly to the Yellow Lift's upper level, and contains explosive Power cores built into the wall. Players may also drop to the "Shotgun hall" from here.

Some have said that the blue nebula is a slip space portal, but no one really knows what it is really for, aside from decoration.

Below the Blue Room, or "Bottom Blue," there is a whole new subsection. Players will find the Shotgun in a short hallway reminiscent of the "Green Hallway" in Lockout. However, the hallway is shorter and can be approached from more angles, from above as well as on the same level. Walkways and paths lead to the Yellow Lift's lower level. Moving in the opposite direction, players can take a small Gravity Lift up to the "Sniper Tower" to catch any player’s off-guard. However, using this lift at the start of a Team Slayer game is unwise, as the other team will definitely have control of the Overshield.

The "Yellow Lift" is directly opposite the Sniper Tower, and is on the other side of the center Platform. Modeled after the "Blue Lift" from Lockout, players can travel upwards from the lower level. Players may also drop down from the upper level via two "holes" on either side of the lift. Another common trick is for players to send grenades up the lift first, sometimes scoring a stick with a plasma grenade. There is a small walkway that connects the lower levels of the Yellow Lift and center Platform. On the upper level, players can move in 4 main directions (or retreat into the "holes" on the side of the lift).

A Battle rifle spawns on the top level giving players some range against snipers. The player can choose to go to their left, pick up a Active camouflage power-up. If the player travels to their right, they can jump into the Blue Room, which can be tricky, or drop on opponents below. They can also take the longer way around by the power cores; this route adds more safety and discretion, as long as the power cores are not detonated.

Not much action occurs in the Green Area, partially because the only weapons that spawn here are the Brute Shot and the Plasma Pistol. Like the center Platform, this area is essentially another means of connecting all areas and walkways together. In the center sits an old dead tree stump in which players can grab a Bubble Shield and then jump to the center Platform. The Green Area is connected to the Sniper Tower by means of "The Elbow" walkway. In addition, players may take a small gravity lift jump up to the Yellow Room's ledge (by the camouflage). This area also leads underneath the center Platform, and is a more discreet route to the gravity hammer.

The Center Platform is the main area of Guardian and the main means of player transportation. While no weapons spawn on the upper level, a Gravity Hammer does spawn in the room underneath, making it a key area. Also, less known to some players, in a Team Hammers match (Or any other match where the Gravity Hammer is present), one can set a bubble shield in the middle of the Center Platform, making it an ideal spot to control when grenades can not be thrown into the circle and forcing other players to come into the middle. This also can give it the name called by many people who utilize this strategy: "The Circle of Fun" or to the victims of this tactic "The Circle of Death." Since this area is a transportation zone, it sees a lot of action. Players can reach the center Platform from all the key areas by means of walkways or jumping. Above players can see a Forerunner style structure, which is accessible via grenade-jump off the elbow with help from the plasma battery, a Gravity Hammer bounce, or by going into Forge and positioning a Gravity Lift, just right.

Guardian has been slightly altered for Matchmaking. All three of the Maulers and the Flare have been removed. In addition, invisible barriers have blocked off some areas, such as the ledge above the Active Camo spawn.

The Bubble shield spawn point on the top of the tree stump is an extremely interesting point. If you activate the device on top of the root, anyone who wants to attack you must leap over to melee you. This could be helpful in games like Oddball. The gravity hammer is positioned at the center of the map. The sniper rifle is near it just down the hall. Make sure you know where each man cannon leads to. You can still get turned around in this small map. Get to the gravity hammer as soon as you can. When you have it stay indoors. You can knock people over the edge with it also. The gravity hammer can penetrate barriers like the glass where the hammer spawns.

A free-for-all on Guardian.

A Sangheili model wielding a Mauler.

A Spartan attacks an Elite from above.

A concept art of Guardian.

A screenshot of Guardian.

Active camo in Guardian
Add a photo to this gallery 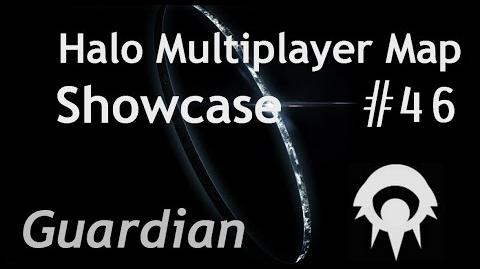 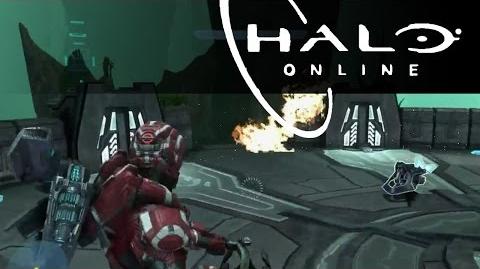 Retrieved from "https://halo.fandom.com/wiki/Guardian_(level)?oldid=1790849"
Community content is available under CC-BY-SA unless otherwise noted.