Their service lives were short due to a unique hull design that was costly both to construct and to maintain, lack of speed, poor armament, and concerns about their tactical viability. They were subsequently replaced by the Marathon-class heavy cruiser. Despite the inherent disadvantages of the design, if upgraded appropriately and handled well, they could be among the most effective, and likely the most expensive, ships in the UNSC Navy.

Around 2510, the class was designed.[7] After the Pillar of Autumn was constructed, the other Halcyon-class ships were not constructed using the honeycomb method.[6]

During the final years of the war, most Halcyon-class ships were decommissioned.[9]

At some point before the Fall of Reach, at least four Halcyon-class ships were decommissioned and left in a boneyard at Aszod on Reach.[10] During the Fall itself, the Autumn would fight a Covenant supercruiser and win.[11] Eventually it would pick up a fragment of the ship's "Smart" AI, Cortana, and escape to Installation 04.[10]

Following the war, the hulls of some Halcyon-class ships were reworked to become the first ships in a new class of Cruiser: the Autumn-class heavy cruiser.[12]

At 1.17 (a reference to the number 117) kilometers in length[1] and one-third the tonnage of the succeeding Marathon-class cruiser, the Halcyons were the smallest UNSC vessels to be designated and structured as cruisers.[3] Compared to later ships, the original Halcyons were expensive, sorely under gunned and slow.[7] According to Cortana they were somewhat of a joke within the fleet. However, with the right upgrades, a Halcyon-class cruiser can be a formidable foe.

The most noteworthy design feature was a series of internal cross bracings and honeycombs that made the ships surprisingly resistant to battle damage; ships of the class were able to remain operational despite sustaining breaches to all compartments and losing 90% of their armor.[3] The durability of the design was demonstrated by the UNSC Pillar of Autumn when she survived a crash-landing on Installation 04 after taking a tremendous beating at Reach and over the ring. However, while the cruiser was intact, it was damaged beyond repair and could never fly again, although some systems were still online such as the fusion core, the engines, and the self-destruct.[13] Another example of the ship's durability was during the Fall of Reach when the ship took on the Covenant supercruiser and took two hits from the ship's main weapon (one of which severely damaged the reactors) and kept going, eventually destroying the supercruiser when just one shot from that ship was able to take out newer and more powerful warships such as a UNSC carrier.

Known elements of the Halcyon-classes' original armament consisted of the following;

Sublight thrust is provided by nuclear fusion reactions which are channeled to six adjacent exhausts at the ship's exterior stern. There are six exhausts visible, two large and four small (though in Halo: Reach there are fourteen exhausts, two large and twelve small). These engines are likely powered by deuterium-deuterium reactions. The main engine core consists of several underpowered Mark II reactors which provided 10% of modern engine output.[3] The class was also equipped with a standard and typical Slipspace drive for translight speeds. On the refit ships, the reactor system was one of the aspects which was heavily retrofitted.

Halcyon-class cruisers are composed of five hexagonal sections mounted onto each other. The bridge is slung underneath one of the forward sections.[4] Eight docking bays are distributed throughout the ship. There are also slots for eighteen lifepods on the ships' hull. Because of the low number, these were likely used only as a last resort if Pelicans or other modes of transportation were not available. Lastly, the MAC is visible as a bump on the bow.

Corridors on the Halcyon-class were segmented by several retractable containment bulkheads. In the event of an emergency, these bulkheads could be closed and affected sections sealed from the remainder of the ship.[4] A potential application of this was during a hostile boarding action, whereas the atmosphere in the sealed sections could be vented via commands from the bridge, asphyxiating enemy troops.

Armories were located throughout the ship, holding a selection of weapons and their requisite ammunition. Eight docking bays allowed a number of Pelican dropships, Longsword Interceptors, Warthogs and Scorpion Tanks to be carried.

A number of service corridors ran the length of the ship. Although normally restricted to personnel, they could be accessed by lifts in main engineering or connecting passageways from the docking bays. If necessary, these expansive corridors could permit passage to Warthogs and some sections were large enough to accept Pelicans. The corridors served a secondary purpose of lessening the ship's considerable mass, thereby increasing acceleration.

A total of 50 Halcyon-class cruisers were built. The first 11 ships featured the famous honeycomb structure.[6]

Right-side view of Pillar of Autumn in Halo: Reach.

A vertical cross-section of a Halcyon-class ship, showing the honeycombed internal layout.

An overlay of Pillar of Autumn and its MAC.

Diagram of the Halcyon.
Add a photo to this gallery

A Halcyon-class using its 50mm PDG against Covenant boarding craft.

Halcyon cruisers sitting in a decommissioning yard on Reach.

A Halcyon-class cruiser on the surface of Reach.

Another view of a Halcyon-class cruiser on Reach.

A Halcyon's size compared to that of a CCS.

The exterior of a Halcyon's bridge.
Add a photo to this gallery 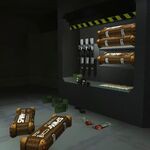 One of the cryo bays

Terrence Hood in the bridge of the Roman Blue.
Add a photo to this gallery

Retrieved from "https://halo.fandom.com/wiki/Halcyon-class_light_cruiser?oldid=1807764"
Community content is available under CC-BY-SA unless otherwise noted.