0785140220
Halo: Blood Line, formerly known as Halo: Spartan Black, is a five-part comic series about a team of stranded SPARTAN-II commandos, set before the Fall of Reach in mid-2552.[3] The first issue was released on the 23rd of December 2009, with the fifth and last issue released on April 28, 2010. Blood Line is written by Fred Van Lente.

“Blood Line is also a pre-"Halo: Combat Evolved" story, focused on a small Black Ops sabotage and intelligence fire team of Spartans assigned to the ONI, the Office of Naval Intelligence. While on a top-secret mission in enemy space, their ship crashes on a remote moon along with a Covenant cruiser. When a mysterious entity that has lurked on the moon for millions of years threatens both groups, Spartans and Covenant have to forge an uneasy alliance to take down the common threat ... but not all humans and aliens can suddenly start treating the other like allies..”
— Fred Van Lente

Main article: Halo: Blood Line Issue 1
“Based on the Best-Selling X-Box Game! The Spartan team codename: Black is the top-secret unconventional warfare unit of the United Nations Space Command's Office of Naval Intelligence, engaging in sabotage and assassination missions deep inside Covenant space. But when this quartet of super soldiers is shot down over a desolate moon along with a Covenant Cruiser, humans and aliens will have to forge an uneasy alliance against a common foe before an eons-old threat destroys them both!”
— Description[4]

Main article: Halo: Blood Line Issue 2
“Greetings! I am the monitor of Line Installation 1-4. I am 6-8-6 Ebullient Prism. My function is to collect and inspect any and all specimens captured within this sector for evidence of immunity to infestation by The Flood. I require your assistance. Please do not move while you are dissected and all your tissues are properly analyzed and cataloged.”
— Marvel.com

Main article: Halo: Blood Line Issue 3
“The Elites and Spartans' uneasy alliance to rescue their captured comrades from the depths of the ancient complex is pushed to the breaking point when a traitor is revealed in their midst. But is the turncoat human, Covenant...or something even more terrifying?”
— Marvel.com

Main article: Halo: Blood Line Issue 4
“Time is running out for Spartan: Black. Their commanding officer is about to be dissected by the psychotic monitor of The Line. Their AI Iona has been infected by Forerunner technology. One of their own has turned against them, pushing their already uneasy alliance with the Elite to the brink. A massive Covenant armada is converging on their position. Only a desperate gamble will save them -- but that's why you always bet on Black.”
— Marvel.com

Main article: Halo: Blood Line Issue 5
“THE ACTION-PACKED SERIES BASED ON THE BESTSELLING X-BOX GAME COMES TO ITS WHITE-KNUCKLE CONCLUSION! Spartans, Covenant and Forerunners engage in a furious three-way battle for control of the mysterious Line installation, the power of which rivals the fabled Halos themselves! Will Spartan: Black be able to heal the rifts within their unit long enough to secure The Line for the forces of Earth...or is this their last stand against overwhelming alien forces?”
— Marvel.com 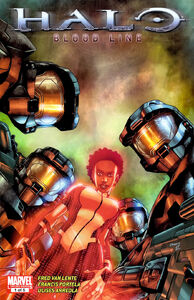 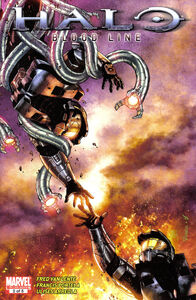 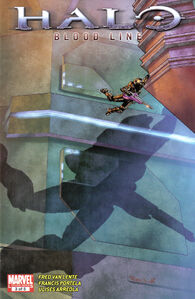 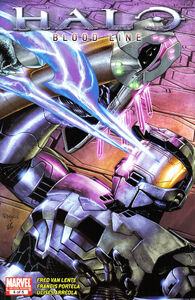 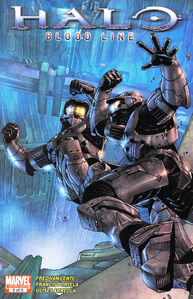