24 pages for each issue

Halo: Fall of Reach - Invasion is the third and final story arc in Halo: Fall of Reach, an upcoming series of a comic book adaptation of the novel Halo: The Fall of Reach. This series will be published by Marvel Comics in conjunction with 343 Industries, and written by Brian Reed with art by Felix Ruiz.

Invasion follows the second story arc, Covenant, and covers the time period of the Fall of Reach and the events leading up to Halo: Combat Evolved.[1] The story arc is named after the Fall of Reach where it was invaded and annihilated by the Covenant in the concluding events of the story.

ONI formulates a plan called Operation: RED FLAG a planned UNSC operation designed to put an end to the Human-Covenant war; Master Chief meets Cortana for the first time and receives the new Mjolnir Powered Assault Armor/Mark V which is put through a series of obstacles while Reach's Remote Scanning Outpost called Fermion detects a large anomaly bearing down towards Reach.[2]

Master Chief and Cortana continue to put the new MJOLNIR Mark V armor through its paces and face off against an UNSC SkyHawk firing live ammunition; the remainder of SPARTAN-II's are introduced to Operation: RED FLAG and its mission to capture a Prophet but all that changes when the unexpected has happened: the Covenant have found planet Reach.[3]

The Pillar Of Autumn And The UNSC Face Off Against A Massive Covenant Force in defence of planet Reach and John-117 And His Fellow Spartans continue to fight for their home against the invasion force and prevent the location of Earth from falling into Covenant hands.[4]

The Covenant Continues its Invasion Of Planet Reach pushing The UNSC to its breaking point with Master Chief And Cortana Struggling to Save on the Planet And the Fleet; with Reach lost the Pillar of Autumn is forced to flee the battle and arrives at Installation 04; thus leading up to Halo: Combat Evolved; this is the Final Chapter In The Halo: Fall Of Reach Saga By Brian Reed And Felix Ruiz!.[5] 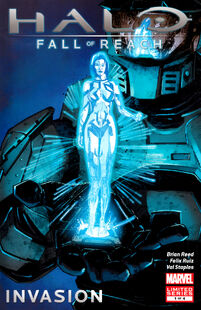 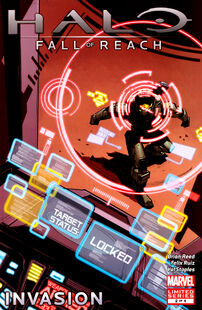 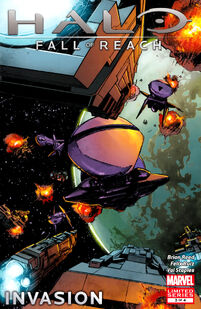 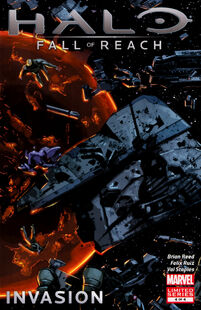 Front cover of Issue 4 Halo: Fall of Reach - Invasion
Add a photo to this gallery

Retrieved from "https://halo.fandom.com/wiki/Halo:_Fall_of_Reach_-_Invasion?oldid=1790951"
Community content is available under CC-BY-SA unless otherwise noted.