0785140239
Halo: Helljumper is a five-part series of comics, published by Marvel Comics, and chronicling the stories of Alpha-Nine from the 105th ODST Division of UNSC Marine Shock Troopers.[1][2]

Main article: Halo: Helljumper Issue 1
“Comic legend Peter David and up-and-coming artist Eric Nguyen bring a whole new HALO story to life! When the colony planet Ariel sends out a mysterious distress signal, it’s up to the UNSC’s elite, highly skilled special-ops Marines, the Orbital Drop Shock Troopers from the 105th, to find out what’s happening. Also known as ODSTs or “Helljumpers”, these soldiers are some of the toughest in the galaxy…and some of the roughest as well. When the distress signal comes, two Helljumpers will find themselves at the center of the mystery on Ariel, and before it’s solved, they’ll have to put their friendship—and their lives—on the line…[3]”
— Marvel.com

Main article: Halo: Helljumper Issue 2
“Orbital Drop Shock Troopers from the 105th Division—more famously known as the “Helljumpers”—have arrived at a distressed science colony on the planet Ariel…only problem? The place is totally abandoned. As the Helljumpers investigate, trying to figure out what happened to the colonists, it becomes increasingly clear that the colony isn’t quite as empty as it seemed… the discovery of a large Covenant military presence raises more questions than it answers. Helljumpers Dutch and Romeo have penetrated farthest into the Covenant-held facility, and when all hell breaks loose, it will be the ultimate test of their fighting prowess—and their friendship.[4]”
— Marvel.com

Main article: Halo: Helljumper Issue 3
“Mysteries deepen as the Helljumpers’ investigation of the curious events at the Space Colony Ariel continues. Cut off from the rest of their company, Dutch and Romeo must use every ounce of skill and strength to stay alive. But earth-shaking events--both physical and personal--will truly test the mettle of these two brothers-in-arms.[5]”
— Marvel.com

Main article: Halo: Helljumper Issue 4
“With an entire Covenant regiment hot on the trail of their comrades, Dutch and Romeo don't have a lot of options...the radios are out, so they can't alert their CO as to what's behind them, and they don't have enough firepower to take the Covenant force out on their own. But... hey, what's this here? A lightly guarded Covenant Drop Ship? But who'd be stupid enough to steal a Drop Ship? Two of the UNSC's finest, perhaps?[6]”
— Marvel.com

Main article: Halo: Helljumper Issue 5
“Dutch and Romeo have gotten themselves into some pretty crazy situations, but stealing a Covenant ship would definitely get both of them a medal for Most Insane Thing Done In the Line of Duty. If they survive this, they'll still have plenty of questions to answer: what the heck are the Covenant doing here on Planet Ariel, an otherwise harmless colony? And why are they acting so strange-taking the humans hostage instead of glassing the planet, which is their M.O.? Whatever's lurking deep underneath the surface, if the Covenant wants it that bad, it has to be big... and deadly. DON'T MISS THE GRIPPING CONCLUSION TO THIS HEART-STOPPING STORY![7]”
— Marvel.com 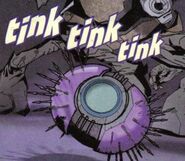 The Unnamed Covenant Explosive that appears in Issue 5.