The Halo: Reach ViDoc: A Spartan Will Rise is the fifth ViDoc to be released for Halo: Reach. It concentrates on the members of Noble Team and is narrated by Dr. Catherine Halsey. 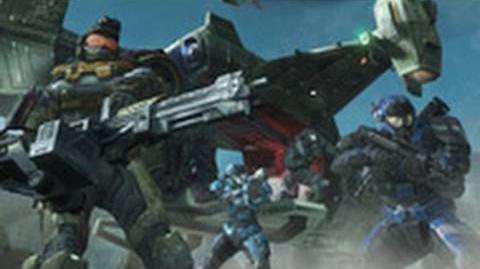 Halo Reach - A Spartan Will Rise
The Halo: Reach ViDoc
Add a photo to this gallery

Bungie ViDoc: A SPARTAN WILL RISE The screen fades to black

View opens to show a towering, twin-peaked mountain on the surface of Reach. The wreckage of a UNSC frigate can be seen atop a hill to the right, and fires rage on the ground, making the air thick with smoke. Another shot shows an aerial battle raging over a glassed landscape.

A nighttime view of the city of New Alexandria is shown. Many of the skyscrapers and the bridges connecting them are severely damaged, with fires burning in some of them.

A wide-open daytime view of New Alexandria is shown. Covenant corvettes loom over the embattled cityscape, and in the foreground, a human ship is shot down by a Plasma Torpedo.

Another shot of the night-time city is shown. A UH-144 Falcon takes off from a burning building, and one of the damaged skyscrapers collapses in the background. A Scarab is shown in a desert, along with a damaged Pelican hovering near it. A hologram of Reach with several locations marked and highlighted is shown, displayed by a Covenant ship's holotank.

Noble Team is shown, standing near a red signal flare. A Falcon hovers over them, and Jorge-052 picks up his heavy machine gun from the ground.

Auntie Dot's avatar swipes across the screen. A close-up of Carter-A259 is shown. Cuts to Carter leading Catherine-B320 and Emile-A239 in what appears to be an industrial site, signaling them to stop and split up.

After being deployed to the ground by two Falcons, Carter gives a hand signal for the team.

Carter is shown in combat, along with Jorge and Noble Six, next to a downed Sangheili. Cuts to Carter briefing the team in a small cavern.

A close-up of Catherine-B320 is shown. Kat is shown opening a door with her prosthetic arm and moving out, M6 sidearm in her other hand, followed by Carter.

A first-person view of Noble Six handing Kat a recorder chip is shown. She quickly snatches it from Six's hand. Several computers and displays are seen in the background.

Kat is shown hacking a door control panel while Carter covers her from enemy fire.

Cut to Emile tossing Kat a red device, while inspecting a site during the events of the level Winter Contingency.

A burning Warthog can be seen on the background. Cut to Jorge and Kat crossing a bridge while under fire from the Covenant. Kat takes cover behind Jorge as they move forward, both firing their weapons.

Jun-A266 is shown loading rounds into a sniper rifle magazine.

Jun is shown firing his sniper rifle from a Falcon. Cut to Jun taking cover behind a Covenant Supply Case to avoid a Phantom's searchlight in a nighttime environment.

Shows five Hunters, one of them firing its assault cannon, in a nighttime environment.

Cut to Jun in firing stance, lowering his weapon and backing to the shadows. Auntie Dot's avatar swipes across the screen. Shows Emile-A239 with his shotgun, then cut to show him in a Pelican's troop bay, firing his grenade launcher at two pursuing Banshees and a Phantom, while under fire from the aircraft.

Cut to Emile firing his shotgun whilst moving forward, and pulling his kukri out of its sheath.

Auntie Dot's avatar swipes across the screen. A close-up of Jorge-052 is shown. Cut to Jorge firing his machine gun at an incoming Spirit dropship in a rain-soaked courtyard. Shows Jorge and an Army trooper covering a Warthog while under fire from the Covenant.

Cut to Jorge firing his machine gun from the back of a Spade driven by Noble Six, with Carter in the passenger seat. A T'vaoan barely evades the vehicle. Cut to a zoom-in view of Jorge with his machine gun, at a rainy courtyard.

Shows Jorge leaping out of a Falcon. Kat, and the other members of the team do the same in the background.

Shows SPARTAN-B312, turning to face the camera, beside an ONI computer with some of its internal components exposed.

Cut to Six and Carter taking positions on both sides of a door. Carter throws in a fragmentation grenade, and the Spartans move inside. Cut to a first-person gameplay, with Noble Six taking out Kig-Yar, Unggoy and an Elite with night vision active. Shows Noble Six firing a Falcon's turret.

Cut to first-person gameplay of Noble Six firing a Falcon's turret at an incoming Banshee over New Alexandria. Shows Noble Six jumping from a platform in an industrial area in New Alexandria and activating his jetpack.

Auntie Dot's avatar swipes across the screen. Shows Noble Team being briefed on their first mission by Colonel Urban Holland in a UNSC outpost. Cut to Noble Team moving out of the outpost, to two Falcons that take off and fly away.

Cut to show Dr. Catherine Halsey from behind, by a large, transparent viewscreen. On the screen, the profiles of Jorge, Kat and Carter are visible, with "MIA" marked under them. Below them, a map of Reach and the Noble Team emblem can be seen. Shows Halsey from the other side of the screen, shutting down a video feed of Noble Team's Falcons taking off. Halsey turns to face an unseen individual and smiles.

Halsey turns back to the viewscreen, and shuts it down with the push of a finger. The screen goes dark, only displaying the grid pattern associated with Auntie Dot.

A single dot moves to the center of the screen and turns into Auntie Dot's avatar, which quickly flickers off, only leaving a black screen.

The Halo: Reach logo is shown. View from the orbit of a glassed Reach, with Epsilon Eridani in the horizon.

Shows the text: Remember Reach 09.14.10 The Bungie and Microsoft Game Studios logos are seen in the lower left and right-hand corners of the screen, respectively.

Video ends in the Xbox 360 logo being shown on the screen.

Retrieved from "https://halo.fandom.com/wiki/Halo:_Reach_ViDoc:_A_Spartan_Will_Rise?oldid=1783594"
Community content is available under CC-BY-SA unless otherwise noted.