The Halo: Reach Multiplayer ViDoc: Zugzwang Evolved is the second Halo: Reach ViDoc but is merely an April Fools Day prank regarding changes to multiplayer in Halo: Reach. 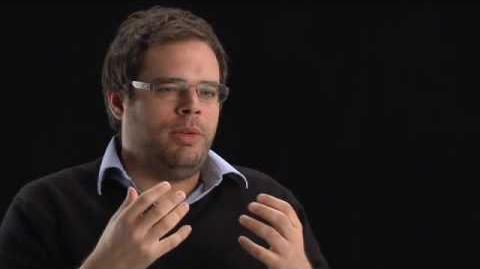 0:14 - Joseph Tung: We definitely talked about wanting to do something really different for this game, and to give people things that they’ve never seen before.

0:13 - Luke Smith: Us designers were often tasked with this really difficult problem of inventing fun.

0:30 - Luke Timmins: One of things we really struggled on was, was the tactically intricate gamers which, which, we were trying to improve that bridge. The next level, we went back, we spent months looking at, you know, trying to go back through time about what really represented the things that we wanted to bring to the game.

0:42 - Jon Cable: I think people want something new. Uh, we’ve done the real-time First-person shooter, we beat that to death.

0:51 - Tyson Green: There’s more to strategy than just landing headshots. That’s talent, right, but you have to be able to look ahead, you have to sort of plan your moves for your character.

1:00 - Ben Thompson: It takes a strategy component and introduces it to the Halo universe that we really haven’t done in the past.

1:15 - Tyson Green: They’ve been really just driving us from day one. It kinda spawned out of this, like, what can we do with Halo that has not been done before?

1:35 - Jon Cable: Chess is the longest running competitive multiplayer game in the world and I don’t see why, uh, our version can’t contain that legacy.

1:43 - Tyson Green: Obviously, they’re doing something right, that, they’ve got this game, that doesn’t really have any options, and… why don’t we give it a try?

1:50 - Ben Thompson: We tried to give them each weapons that really correlated to the purpose of that particular unit. You are restricted to the moves each of the characters can do.

1:59 - Steve Scott: Everybody brings a little bit of a different perspective, a different experience to the table. If it’s a good idea, we just say, absolutely, let’s change direction, let’s go with that!

2:08 - Luke Smith: We wanted to figure out something that you could do, sort of bring fun back to Halo.

2:14 - Tyson Green: Chess is about the kind of oldest Slayer there is.

2:17 - Ben Thompson: You start off as the Monitor and you’re ready to make your move. You go down and you pick that piece and then you are actually put into that character, you are able to control that character.

2:34 - Luke Timmins: I’m excited to see how it turns out, I’m really excited, but… I don’t know, every game, you think you’re doing the right thing then it turns out you fucked everything up.

Cuts to the words, "Halo: Reach, Falls 2010" that latter phrase which changes to "Fools 2010" while lower down on the screen appears the phrase "Love, Bungie"

Retrieved from "https://halo.fandom.com/wiki/Halo:_Reach_ViDoc:_Zugzwang_Evolved?oldid=1752027"
Community content is available under CC-BY-SA unless otherwise noted.