The Eisner Award-winning team of superscribe Brian Michael Bendis and artist extraordinaire Alex Maleev unleash an epic story of mankind's struggle against the alien threat of the Covenant. Picking up from the conclusion of blockbuster video game Halo 2, the must-read issue reveals how John-117, while on board a hostile ship headed towards Earth, is battling against Covenant forces. Intertwined with John-117's interstellar one-man-war is the saga of a great American city's rebellion and downfall, two desperate lives' collision and shared fate, and the Covenant's hunt for an ancient relic of untold power and value. With hope dwindling and the fate of humanity hanging by a thread, is there any chance for a future? Read this debut issue to start the journey into the Halo universe!

In the comic, John-117 is depicted in the Forerunner dreadnought, with doors very similar to the sort found in the level, 343 Guilty Spark, and a room similar to the one which contains a Seraph in the Halo 2 level, The Arbiter. He is contacted by a base on Io, one of Jupiter's moons, but demands silence and moves on, killing a group of four Grunts, then a pair of Jackals, then another Grunt quartet.

As this happens, the scene cuts to an interrogation of Colonel James Ackerson, captured by the Covenant aboard the Covenant Cruiser Triumphant Declaration. He is about to be killed in celebration of the defeat of Earth before he coaxingly states that if "The Covenant attack Earth...they will never find the key." The Brute Captain interrogating Ackerson is intrigued by this, and uses a large knife to lacerate Ackerson until he reveals more information. Ackerson states that this key, if not found, will force the Halos to malfunction "like they did before." He also said that it is hidden in the city of Cleveland, and that it is called the Key of Osanalan.

Before he can reveal more, he falls unconscious, leaving the Brutes confused and worried. A new, self-doubting character named Ruwan Ackerson is introduced who serves as a concierge for a high-line motel in Cleveland under attack by the Covenant. He meets Myras Tyla, a performer staying there who commandeers several weapons from a dead Marine and manages to escape with Ruwan. They try to flee in vehicles but find the road blocked, and are finally herded together with what seems to be most of the population of the area into a stadium, where the Covenant declare that to live they must find and give to them the Key of Osanalan. Myras is confused, but Ruwan states with certainty that he "knows exactly what that is."

John-117, in the meantime, finds himself faced by an extremely large force of Covenant troops, including at least three Hunter pairs, who fire on him simultaneously with several Assault cannons. He is hit by several beams and falls to the floor. A Brute Chieftain begins to crush him with his foot, saying that John-117 will tell them "where the Key is...after they remove enough parts of his body." 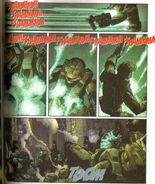 Master Chief being crushed by a Brute.
Add a photo to this gallery

Retrieved from "https://halo.fandom.com/wiki/Halo:_Uprising_Issue_1?oldid=1804862"
Community content is available under CC-BY-SA unless otherwise noted.