For other uses of the word Halo, see here.

Halo is the second campaign level of Halo: Combat Evolved and it begins on the morning of September 19, 2552. It gives us the first "on the ground" view of Installation 04. As the only survivor from the Bumblebee escape pod crash, John-117 fights against the marauding Covenant forces, while searching and rescuing other survivors from the Pillar of Autumn. This is the first level in the series in which Jackals, Spirit dropships, and Banshees are encountered.

The Bumblebee flies over a cliff, trailing smoke. John watches from inside as the craft heads towards the ground at an alarming rate.

A violent crash is heard. Fade to white.

As John exits the life pod:

As John exits the area:

If John begins to cross the bridge:

If John does not evade:

A Covenant drop ship arrives, accompanied by two Banshees. John either eliminates or evades dropped Covenant troops and Banshees, and proceeds through a canyon.

John heads behind the structure to deal with the Covenant forces.

John deals with the next wave.

If all of the Marines are dead:

If John starts to leave the area:

After the final wave of drop ships:

If you walk away from the dropped Warthog towards the distant cave.

If John explores the area on foot or delay for more than five minutes:

A NAV point appears on the distant cave.

John drives into the cave.

After navigating the tunnels, John emerges in a large cavern, with a chasm dividing the floor into two halves. There is no visible way to cross. Covenant forces occupy his side of the cavern. He kills all the Covenant present.

John ascends to a balcony, finds a control panel, and activates it.

When John engages the panel, four giant silver beam-generating structures extend across the chasm, and an energy bridge slowly fades into coherence.

(NOTE: The cutscene mentioned will not occur unless you kill all the enemies in the area. However, the energy bridge will still activate in gameplay.)

John crosses the bridge, and navigates through more tunnels.

John arrives at the exit to the cave.

John approaches the rock slide crash site. There are up to seven Marines that can be saved here.

If the Covenant charges into the rocks:

Marines will all get on top of the highest rock, where the sniper is.

If John leaves the area before evac arrives:

John fends off a few waves of Covenant Forces.

This line changes to reflect which two pods you haven't yet found:

If all of the Marines are killed:

John makes his way up into the hills where the Marines are. There are three Marines that can be saved here.

John defends the survivors from covenant infantry, including a covenant dropship.

If all Marines are killed:

As John leaves the second lifeboat:

John approaches a lifeboat near the river. There are no bodies nearby.

John crests a hill and sees a structure on the cliff's edge.

If John leaves the area before finding the survivors:

If all of the Marines and techs are killed:

If there are still Covenant in the area when you emerge from the structure:

John mops up the last of the Covenant in the immediate area.

John climbs on board the Pelican.

Echo 419 flies away from the area.

An M12 LRV riding around Installation 04 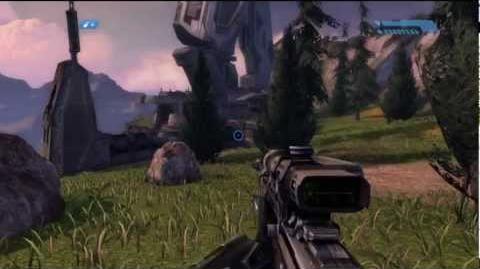 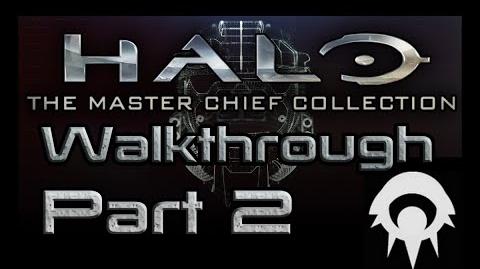