For other uses of the word Halo, see here.

Halo[2] is the tenth and final campaign level of Halo 3. In this level, John-117, Thel 'Vadam and Sergeant Johnson make their way towards the Control Room in order to activate the ring using the Index from the first Halo encountered. However, the Gravemind sends Flood Combat Forms (and later Pure Forms), carried by Flood dispersal pods, to try to stop them.

The Pelican flies towards the Halo ring.

The Pelican arrives at Halo. The rear port engine is too damaged for a normal landing. John-117 makes a crash landing in a snowy canyon near the Control Room. John and the Arbiter clamber out. From behind the cliffs approaches the Forward Unto Dawn.

Assault on the Control Room.

John and the Arbiter mount up to the control room, making sure that they stock up enough supplies from their crashed Pelican.

John and the Arbiter head through the icy caves.

If John does not head to the Control Room at all:

If John heads for the Terminal instead:

When John reaches the Terminal:

After accessing the Terminal.

If John re-accesses the Terminal, or takes too long reading it:

John and the Arbiter arrive at the foot of the pyramid-like Control Room structure. Suddenly, Flood dispersal pods begin to drop in.

If John reaches the end of the wrong side of the tower.

The Arbiter and John-117 push their way up the tower, but the Flood continues to attack with overwhelming force.

Johnson appears on the cliff with a Spartan Laser, shooting down Flood forms.

If you head back the other way:

John and the Arbiter continue upward.

John-117 and the Arbiter get closer to the top. Johnson continues to fire from the cliff.

John and the Arbiter reach the top floor. Johnson quickly joins them.

Flood jump down the tower and attack the three soldiers.

The Flood continues to stubbornly attack with extreme force on the top floor.

John, the Arbiter and Sergeant Johnson finally secure the tower.

As the trio moves inside the Control Room.

John, Arbiter and Johnson reach the Control Room. Flood are heard approaching, but the doors seal them out.

John tosses the data chip to Johnson. Johnson heads for the control panel. 343 Guilty Spark appears from above and accompanies him.

John rushes to Johnson's aid. 343 Guilty Spark shoots at John, who is flung backwards from the force of the blast and onto the floor. His Energy Shields drop and attempt to recharge.

The Arbiter, hearing the commotion, moves forward, and 343 Guilty Spark turns on him as well, unleashing his beam on him and knocking him out of the Control Room. (In single-player, the doors close, sealing the Arbiter out of the room) Spark blasts John again as he tries to get back up. With no shields protecting him this time, his armor starts to smoke.

John fires whatever weapons he has at 343 Guilty Spark with no effect whatsoever. Spark counters with his powerful laser blasts and a repulsion field that forces John backwards.

Unnoticed by 343 Guilty Spark, Johnson manages to sit halfway up and shoulder the Spartan Laser.

343 Guilty Spark rises from the floor, flying at a slightly tilted angle, his metal body visibly damaged. At this point, 343 Guilty Spark will say four sentences at random.

After making the first shot, Spark begins to fly at a more tilted angle, leaking blue plasma from his sides and he begins to spark. Again, the following sentences are in random order.

Following the second shot, Spark's casing becomes distorted, with pieces of him sheared off completely. More plasma leaks from his sides and the sparks happen more ferociously. The right side of his 'eye' has broken off. Once again, the following sentences are said in a random order.

After making the finishing shot.

John-117 bends over Sergeant Johnson, who is still alive - barely.

Johnson grabs John's hand with Cortana's chip in his.

Johnson succumbs to his wounds. John takes Cortana from him and lets go of his hand. He stands up, and wordlessly releases Cortana into Halo's core, gripping the data chip tightly.

John-117 says nothing. He shakes the chip with his hand but quickly stops. Cortana bows her head, eyes closed, and makes a gesture, activating Halo. She uploads herself back into her chip.

John places her chip in the back of his helmet, and then turns around. Brilliant beams of light erupt from the Core, and the whole Control Room starts to shake and fall apart. Johnson's body slides off the platform as it tilts to one side and begins to fall. John-117 runs for the door, which has opened again, The Arbiter can now be seen waiting for John.

The Way the World Ends

Pedal to the Metal.

Pieces of the walls around them suddenly explode; and John-117 and the Arbiter run for the doorway leading outside; fighting a small group of Flood along the way.

John-117 and the Arbiter make it back outside, revealing a piece of collapsed ice forming a slope upwards.

If you take too long to go to the doorway.

John and the Arbiter head along the cliff, encountering Flood and Sentinels, who followed 343 Guilty Spark's lead and have turned against them too.

They make it inside, and find themselves in the middle of a battle, between the Flood and a group of Sentinels.

They make it back outside.

The Arbiter takes the turret. John takes the wheel.

As they reach an open area, a massive explosion erupts alongside them.

John and the Arbiter reach a massive open structure.

The Warthog soon enters inside the interior of a large hallway with ramps.

They soon reach another open structure where battles between the Flood and a few Sentinels continue.

They come upon a large open stretch.

They reach one more open structure, this time a few Flood Pure Forms await them.

They reach another hallway with ramps, where a larger battle between Sentinels and the Flood rages on.

The Warthog makes it out of the hallway battle, to an area where the Frigate can be seen from a distance.

They head for the final bend, encountering more Sentinels.

If the player heads to an Easter Egg, they meet one last Covenant soldier.

John and the Arbiter make it to the final straight stretch to the Forward Unto Dawn, but there's a 70 m (230 ft) gap of thin air between the open cargo bay and the edge of the structure.

The Warthog makes the jump, but doesn't land well, tumbling and rolling as it crashes into the Frigate's hangar. John-117 and the Arbiter recover, then the Dawn shifts. A Scorpion Main Battle Tank begins sliding towards the Arbiter, who takes cover behind a pile of crates. The tank plows into it. John leaps over the Warthog and hesitates, seeing the Arbiter digging himself out of the crates. John nods at him, and Arbiter nods back. The Arbiter rushes to the bridge while John runs to the hangar panel and plugs Cortana in to take control of the Frigate. Her image appears from a Holotank next to the panel.

Cortana ignites the thrusters at full burn and launches the Dawn at full speed. John grabs onto the terminal, hanging on for dear life as the Dawn leaves Halo's atmosphere. As John tries to stay anchored, the Warthog flies out, striking John on its way through the open hanger doors and out into empty space. John flies off the panel, then glides down the floor towards the doors, with a self-destructing Halo looming beneath. John punches his fist hard into the floor to get a grip, halting near the back end of the hangar. Cortana reaches out her arm towards him, scared of losing him.

The Scorpion flies out towards John. He ducks his head just in time as it flies over him, narrowly missing John but smashing the floor behind him and falling back towards Halo. John begins to climb back up to Cortana, finally making it to the Holotank. Meanwhile, the Arbiter makes it to the bridge and sits down at the controls. John braces behind the panel, plugging Cortana back into his helmet.

On a hillside near the Gateway to the Ark, which has now been shut down, Marines gather. Fleet Admiral Lord Terrence Hood removes his hat, and begins his speech.

Background Memory: The front half of the Forward Unto Dawn enters the Earth's atmosphere, and crashes into the Indian Ocean.

Background Memory continued: An engineering crew cuts into the Dawn with torches. The Arbiter emerges from the wreckage.

The Arbiter is revealed to be present at the memorial, standing solemnly with the Marines.

Admiral Hood puts his hat back on, and salutes. Sergeant Pete Stacker turns to the other marines present.

Seven Marines raise their Battle Rifles and each fire a single burst of three shots: a 3-volley salute. The view pans over the Ark Portal, now closed and silent, and Mt. Kilimanjaro against the evening sky.

Later, Hood and the Arbiter stand alone at the Memorial, which appears to be a Pelican wing, decorated with pictures of the fallen, including Lieutenant Commander Miranda Keyes and Sergeant Major Avery Johnson.

Hood holds out his hand to the Sangheili.

The Arbiter slowly shakes Admiral Hood's hand. After letting go, Hood's eyes are drawn to one part of the memorial in particular.

The Arbiter looks away, toward the Shadow of Intent, hovering silently in the sky.

The Arbiter leaves the Memorial. His Separatist Phantom heads back to the Shadow of Intent, hovering in about the same position the Portal to the The Ark once was. The Arbiter meets Shipmaster Rtas 'Vadum on the bridge, looking at a holographic image of Earth.

The Arbiter clenches his fist to his chest.

The Arbiter takes a seat on the command chair, the one normally used by Rtas 'Vadum.

The Shadow of Intent leaves Earth, to rejoin the remains of the Covenant Separatist fleet in space. Going back to the memorial, the view shows that underneath the print "UNSCDF March 3, 2553," the number "117" is carved into the metal of the wing, and the rank of Master Chief Petty Officer of the Navy is taped to the upper right of it as a tribute to John-117.

John-117, very much alive, awakens, floating in zero gravity in a debris-filled hallway on board the Dawn.

John-117 looks at a gaping hole in the hallway. He drifts to his floating Assault Rifle, and holsters it, then begins to drift to the end of the hallway.

John reaches the end of the hallway, which opens up into empty space. The Forward Unto Dawn is revealed to be sheared in half, floating in a cloud of its own debris, still red-hot from the sudden Slipspace slowdown.

The Dawn's remaining half continues to drift aimlessly in unknown space.

John begins to drift further inside the ship, finding a row of cryotubes, complete with a Holotank to plug Cortana into.

John plugs Cortana's data chip into the Holotank and she appears.

John-117 turns off the flashlight on his helmet.

John places his Assault Rifle in one of the rackets on the wall.

John climbs into one of the cryotubes.

The cryotube door begins to close.

Cortana smiles, nodding. The cryotube closes and seals, freezing John-117 and bringing the Halo Trilogy to its conclusion.

The back half of the Forward Unto Dawn is seen drifting towards Requiem. The planet eclipse its star at first, but the star slowly comes out from behind the planet, casting light upon it momentarily before blinding the view completely. 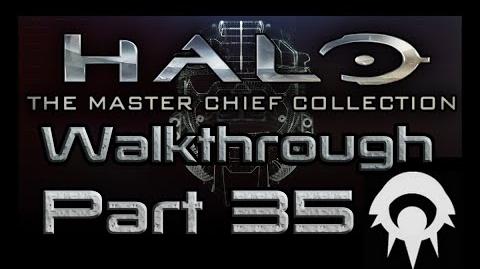 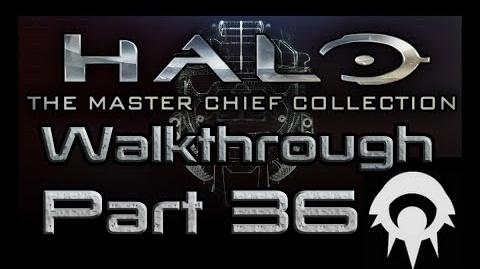