The Halo 2 E3 Demo was a real-time demonstration of early plans for Halo 2's Outskirts and Metropolis levels. It was shown at E3 2003 and showed some designs for Halo 2, including ODSTs, semi-automatic Battle Rifles (as opposed to the three-round burst in the final product), Dual Wielding, SMG's, Brutes, the Gauss Warthog, and many other new features.

John-117 is en route to a UNSC field command post turned field hospital to assist the Marines in destroying an artillery cannon and securing the area. The Pelican lands and John-117 exits with a few ODST's to be introduced to Cpl. Perez who takes him through the field hospital to Sgt. Banks' position.

John-117 proceeds through the camp witnessing the new animations of allied AIs. He then passes through a destroyed building housing a Marine Heavy Machine Gun team and Sgt. Banks. Both are pinned down by Covenant forces. The Sergeant then calls in an airstrike on the artillery cannon. A flight of Longsword fighters promptly complies, launching a successful bombing run on the cannon. After the airstrike has occurred, Banks gives the player his SMGs, providing a short introduction to the new feature of Dual Wielding. Using his new weapons, John clears the area of Covenant troops before moving over a pile a debris and into an open street.

On the street there is a packed group of about seven Jackals with energy shields. Upon spotting John they form a phalanx and begin to open fire with their Plasma Pistols. After a few moments of shooting the group of Jackals are splattered by a pair of Warthogs. One of the Warthogs is the new Gauss Warthog, the driver instructs John-117 to man the Gauss Cannon mounted on the back. Upon John entering the turret, Warthogs drive around the city streets, the layout of which is reused for the area before the Scarab attack in the Halo 2 level, Metropolis. After John destroys a few Shadows and Ghosts, the Warthog is boarded by a Brute who kills the Marines in the passenger and driver seat, prompting John to exit the vehicle to take action against the boarder.

John-117 quickly kills the Brute and a few of his comrades with his Battle Rifle before being alerted by Cortana of a fast approaching Ghost. Chief proceeds to board this vehicle by hijacking the Ghost, introducing yet another new Halo 2 feature.

John proceeds to wreak havoc on the Covenant troops in the area before he is instructed by Cortana to escape the area via a tunnel which leads to a bridge. The demo then cuts then changes to a cutscene of two Brutes on Ghosts chasing John through the tunnel. As a sign declaring "Highway Access Denied" flashes, the automatic doors at the end of the tunnel begin to close. In response to this small crisis John-117 speeds up, barely making it through the remaining space between the closing doors, although in the process his Ghost is destroyed, leaving him stranded on foot. However the two pursuing Brutes are not so lucky. The door closes completely before they get to it and a shot from the outside of the tunnel shows the two explosions caused by the crash of the Brutes' Ghosts.

Just after Cortana points out a Covenant ship in the sky, a barrage of glowing drop pods begin to land around John. Elites step out of these Drop Pods and draw their Energy Swords. Chief responds holstering one of his SMGs and charging up a Plasma grenade. Cortana, noting Chief's action, teasingly says "bet you can't stick it" to which John-117 responds "You're on." As he lunges forward to toss the grenade, the demo ends.

The screen shows a large city under fire

A Pelican zooms into view. We see John-117

Zoom out. We see the Pelican flying over the cloud layer

The Pelican drops right into the city

Fade in. We see two Marines looking on the LZ. Plasma mortars fly over the air above

In the back of the Pelican, We see ODST's getting their weapons ready

The Pelican lands smoothly, with a Marine covering himself from dusts

John-117 follows the marine through a field hospital

The Marine stops at a wounded Marine

John-117 follows the Marine yet again. He walks into a building, up the stairs. You hear gunshots

John-117 follows the Marine to another part of the building

In the background, an artillery cannon fires a plasma mortar, which fires out overhead. John-117 moves along

The artillery cannon fires another mortar. This time, it hits a nearby building, destroying part of it and causing debris to fall

Marcus Banks walks over to a dead Marine, and takes out his radio

John-117 continues to fight, with the Artillery Cannon still intact

Overhead, two Longswords approach the Artillery Cannon, and destroy it, then continue on

He gives John-117 his M7/Caseless Submachine Gun and holds his stomach after giving it, as if he was hurt

John-117 jumps off the balcony, and into further battle. Later, he goes into the damaged building, where more Jackals appear

Later, John exits the building and sees a group of jackals forming a formation, which get run over by a Gauss Warthog

John enters the gunner. A Shadow passes by, and he destroys it

The Warthog goes along. Then, two Ghosts appear

John destroys the second one as well

A Brute drops in from the Phantom. He kills both Marines, then knocks out John, and the Warthog crashes into the wall. John kills the Brute

John-117 jumps onto the wing of the Ghost

The Ghost zooms off, and the camera follows it. Behind it, a Phantom approaches, followed by a ghost, and another Phantom. The camera zooms in on John-117 when he looks back. The first Phantom starts shooting at John with the frontal turret, with another ghost leading John. He narrowly misses the shots of plasma. The Phantom shoots at the 'Welcome to New Mombasa' sign to stop John. It ends up falling on the Phantom, and the Phantom flips on it's side and explodes, with John escaping

John approaches a closing wall in the highway tunnel. He narrowly escapes, and scrapes the road behind him as he slides down the bridge

Inside the tunnel, an enemy Ghost piloted by a Brute crashes into the fully closed wall, and explodes. There are two explosions on the other side of the wall.

Several Elite drop pods land around him. He turns around, and another drop pod lands in front of him. An Elite pops out. It activates its sword. Around it, the rest of the Elites notice him and also activate their swords. John puts away one of his M7/Caseless SMGs and pulls out a plasma grenade

Differences with the Final GameEdit 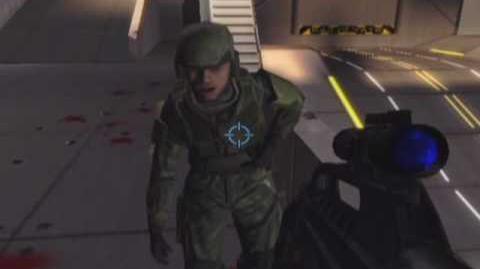 Retrieved from "https://halo.fandom.com/wiki/Halo_2_E3_Demo?oldid=1810595"
Community content is available under CC-BY-SA unless otherwise noted.