Were you looking for the gametype, King of the Hill, or the installment of the Reclaimer Saga, Halo 4?

Halo 4: King of the Hill Fueled By Mountain Dew is a location-based augmented reality app designed by Ogmento to advertise Halo 4. It released on the 31st of October, 2012 on iOS and Android devices, and was met with heavy negative reception.

The app required the purchase of Halo 4-branded Mountain Dew bottles or Doritos packets, in order to obtain codes which the user would then scan into the app. Doing this increases the player's standing at their particular 7-Eleven store. If the player manages to top the leaderboards, and become 'King of the Hill', then they are eligible for certain in-game rewards in Halo 4.[2]

The game was received badly by critics and gamers alike. Many, such as Eurogamer, viewed the app as a shameless marketing promotion, and cash-grab.[2] One writer at Game Rant said that the Halo brand name deserved better, and that the app was "an unsightly, if inconsequential, blemish" on an otherwise perfect record.[3] Nevertheless, the head of Ogmento spoke out to defend the game, citing that it was played by many and had attracted people to both 7-Eleven stores, and Halo 4 itself.[4] 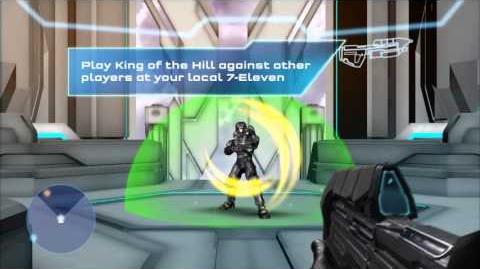 Halo King of the Hill Fueled By Mountain Dew - Trailer 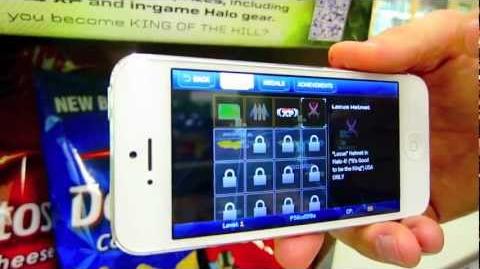 A map of nearby hills.

Promotional banner for the game.

Prompting the player to 'reload'.

A player taking a hill from another. Note the odd colouring and lack of ammo counter on the MA5D Assault Rifle, and the fact it uses the BR85 Battle Rifle's reticle.
Add a photo to this gallery

Retrieved from "https://halo.fandom.com/wiki/Halo_4:_King_of_the_Hill?oldid=1813054"
Community content is available under CC-BY-SA unless otherwise noted.